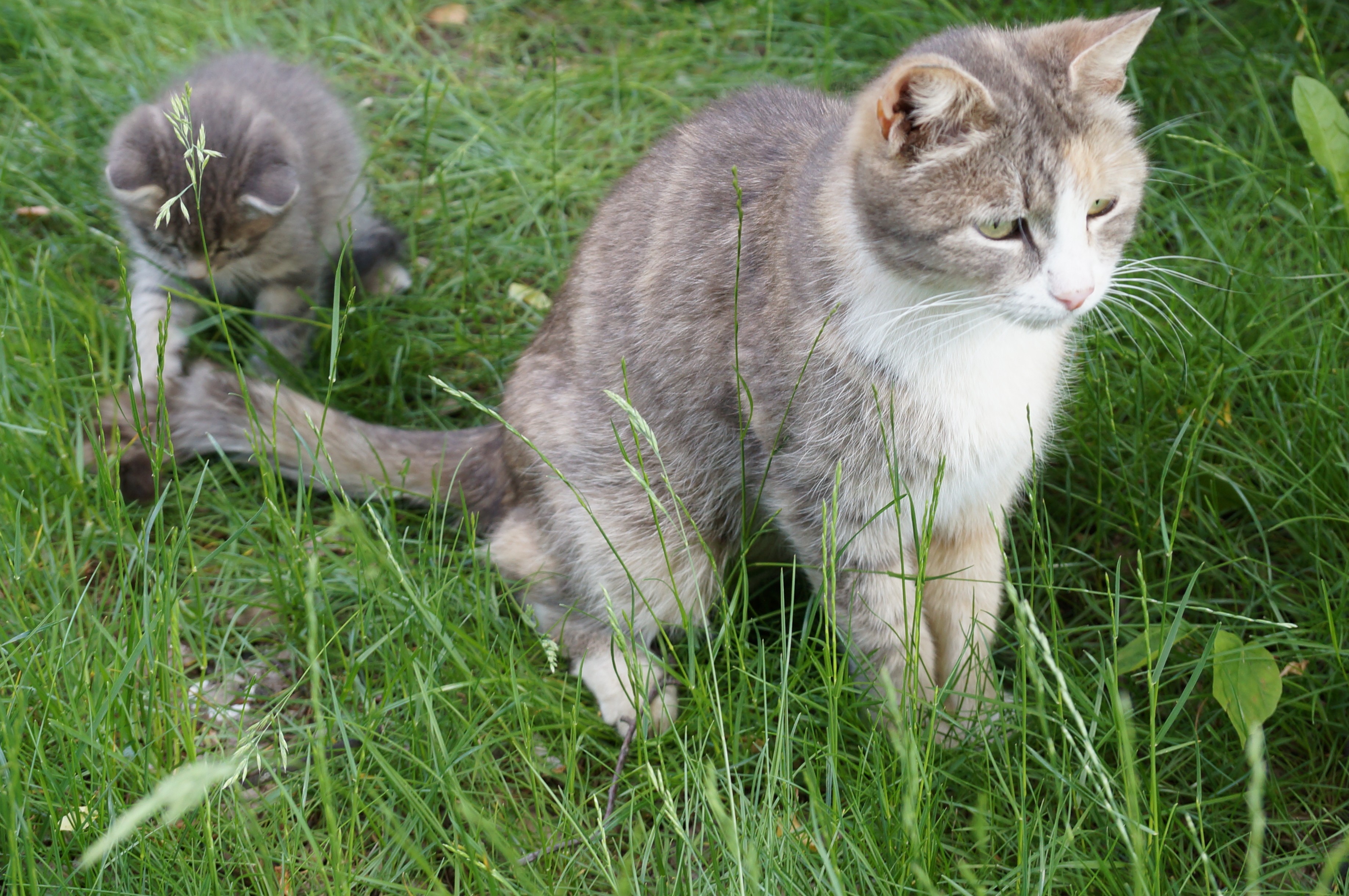 Almost all her life passed before our eyes.
First time we noticed her in a family of some adolescent kittens in the summer of 2013.
She was very tame and affectionate and soon became the most loved cat in our yard.
She was open and trustful to people even to strangers so she was well-known in our yard by many adults and children.
As far as we know, she never had any problems with humans.

Our first close acquaintance with Moos’ka happened in the summer of 2015 when she brought out of the cellar three of her children – Pusha, Ryzik and BigGrey.
I remember how she looked at us when we was taking her kittens home.
Definitely she wasn’t scared for their fate but she seemed to be sorry to shift this burden on our shoulders.

A couple of months later we spayed her, and during two weeks of rehabilitation she could look from the cage on her own children who played on the floor of our room.
Moos’ka didn’t prove herself as an ideal cat during this time, but she didn’t make many problems to us either.
She used her toilet properly, didn’t show any aggression but sometimes began to yell and to sway the cage.

After her wound had healed we returned the cat to the street and began to look for a new home for her.

Spaying had bad influence on the shape of the cat.
After half a year Moos’ka became obese and often sat with half-closed eyes, but she still was very friendly cat and we hoped that she would quickly adapt to life in a home, in a limited space.
In the March of 2016 we made PR photo-shoot and found a family for her.

By all criteria that family looked appropriate, but unfortunately, something went wrong.

First of all Moos’ka wasn’t pleased at all to travel on suburban train and subway.
She was yelling all the way and had an appearance of a cat, dying from heart attack.
We handed her to the family of two people but unfortunately this family was not destined to be a home for Moos’ka.
She held out there for about two weeks. During this time she visited a vet clinic and was treated against parasites.
As prospective owners claimed, she manifested rather strange, semi-aggressive behavior, tried to grind her claws against people’s skin and so on.
We supposed that it could be an effect of anti-helminth pills, because they could affect nervous system, and after some time the problem had disappeared…
But later Moos’ka began to use their wardrobe as a toilet…
All these evens are known to us only from her owners. Maybe that was so, maybe not.
New owners sent us only a few pictures of bad quality.

Maybe the new owners was just disappointed by the fact that Moos’ka wasn’t so tame as we advertised her.
This is partially because our posts on social networks are more advertisements than “the real product description”…
That’s the rules of the game…
And partially our attempt has failed because it turned out that Moos’ka wasn’t ready to live in a limited space with unknown people.
Apparently that situation was too stressful for her and she couldn’t show her best traits.
Even her way back was significant stress for her – she again was yelling and panting like a steam engine all the way.

So, these owners became “former owners” and Moos’ka was returned to us.

I have to mention that Aunt Valya was very angry on us for we took Moos’ka without asking her permission.
Aunt Valya said that we took the most loved cat in the yard which lived here quite happy and free life.
So, to her contentment, we returned the cat to the yard.
After that, Moos’ka had only one year to live.

After this exhausting and futile attempt, and also Aunn Valya’s opposition we didn’t make any attempts to find a home for Moos’ka.
She lived on the street, flirting with people.


She helped to Extraordinary Cat to stay in our yard and had made many more small yet significant, compared to cat’s abilities, deeds in her life.
She also didn’t take offense for our clumsy attempt to find a home for her and often waited us on the porch to ask for some food.
I remember one night I took a look out of my window and saw Moos’ka, sitting on the pavement beneath the window. She was looking at us kneading something invisible by her front paws.
I came out and gave her a food, which she wasn’t particularly interested at, but I couldn’t do anything else for her…

In the Spring of 2017 she was violently killed by dogs. It has happened right beneath our windows but we didn’t hear anything and nobody has helped her.
I often noticed that Moos’ka was not cautious enough. Especially with dogs. I saw many times that she allowed dogs to come too close and didn’t run.
Maybe she didn’t believe that dogs can do a real harm to her?
Anyway, this time she made some other fatal error. Something went wrong again in her life. The last time.
Image below was accidentally taken the day before her death. She is eating pasta with her fellow cats Nose and Spinka.

It was a drowsy rainy day. I remember myself feel slow and only partially conscious.
I carried garbage to the dumpster and saw Moos’ka at the adjacent house. She was sitting on the porch under the ledge and apparently was waiting for the rain to stop.
I came back home and forgot about Moos’ka until a couple of hours later I looked out of the window and saw something spotty laying on the sand of children’s playground…
It was a huge shock when we understood what it was.
Two dogs, one of which, perhaps, had owners because he had a collar, simply came to our yard and kill the cat.
They did it in silence and quickly, right in front of our window, so later we could see almost all of this shocking scene on the ipcam record.
We didn’t hear anything.
There was a man who was nearby and could interfere but he didn’t. I don’t blame him. I understand him, because about 10 years ago me and cats were inhabitants of separate worlds too.
If I saw something like this 10 years ago I wouldn’t have interfered too, considering this event as a episode of wild life.

When we ran to the playground the cat was already cold and numb.

This was not an unusual event in our yard. There are many homeless dogs in our town which run in packs and kill cats.
Sometimes owners allow their dogs to run off the leash and hunt on cats and I really don’t see any legitimate way to resolve this problem.
There are many cats were killed in such way in our yard, which is known only because of witnesses but this is the first event that was “documented”.

We called Aunt Valya. She was crying, cuddling the dead body of Moos’ka and saying: “I loved you so much…”
Some woman went out of the house with daughter, she also knew Moos’ka and also wept.

We buried the cat in our yard.
Aunt Valya put her in a plastic packet and I dug a grave on a lawn near the house.

After this event all disagreements and controversy between Aunt Valya and us have ended for good.
But for me this was a huge shock.
It took at least three months for me to calm down.
I think this event was the final incentive for me to create a blog about our experience with cats and their life as we see it.

After that we rushed to find a home for other cat, that we spayed – Spinka and found a good home for her where she lives more than a year already.
Spinka is a whimsical cat too, but she was lucky enough to find a owner who would love her with all her peculiarities.

So, Moos’ka has gone to the rainbow brige, but her daughter Pusha lives with us and also somewhere lives her sun – Big Grey.