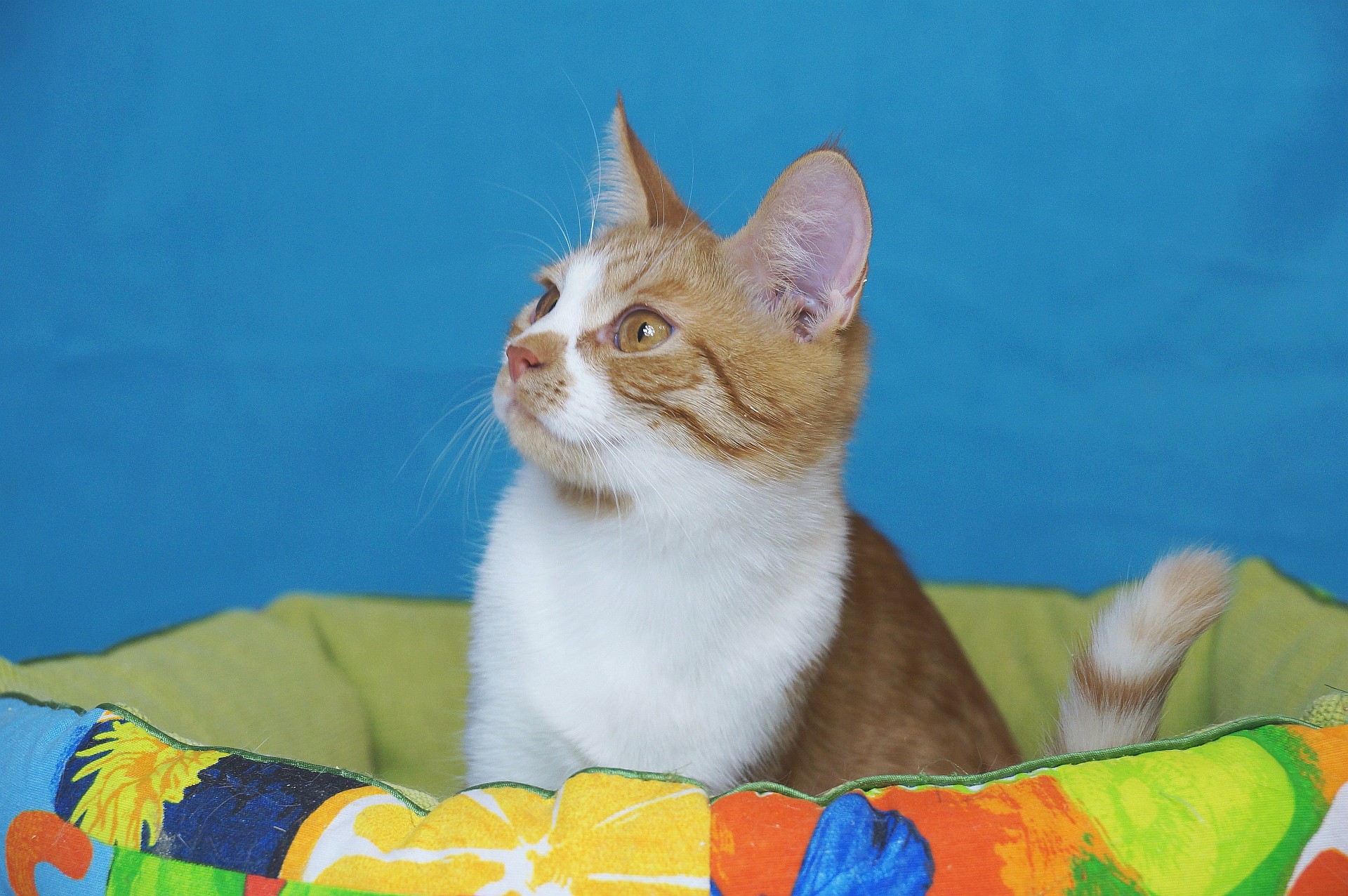 Vesnushka was in the same group of kittens as Banditka, Timophey, Belobrysska.
You can read more about process of finding them in the corresponding posts.
She had some problems with eyes in childhood but they was quickly healed. She also got treatment against lichen, because it was revealed on Belobrysska.

She lived with us from the end of July 2016, when we picked her up, till the February of 2017, when she was successfully adopted.
Almost all this time she lived in a cage because of her lichen, lichen of Pokemons and illness of Ryzik.
She was very shy and silent kitten. She preferred to stay behind backs of other kittens.
You can see all four kittens on the video below.

Because we were afraid that long time in cage can damage kittens’ psyche – for about 2 hours a day they were allowed to play in the room avoiding contacts with other cats.
Sometimes we tried to let them play one by one, in turns, because three young kittens make a great deal of destruction when they are playing together.
But Vesnushka didn’t play alone. She felt uncomfortable without her brother and sister and she used to sit at the door to the cats’ room as if asking to put her in the cage to her family.

Vesnushka didn’t cause any problems to us and had been growing a silent, cleanly cat.

Before we found a new family for Vesnushka we had made three PR photoshoots. Here is the last one:

In the beginning of year 2017 we found a family that wanted to adopt Vesnushka.
We carried her in a bag to the Moscow and this, apparently, was a shocking event for her.
Even I would get dazed in case of such abrupt changes in my life involving street sounds, suburb train and subway, which I’ve never known before.

New owners were interested in agile and cheerful animal, but Vesnushka barely moved after the journey.

We explained that she has a peculiar nature, she is rather shy and all this travel might be shocking for her.
So, we left Vesnushka for a trial period in a small flat in the family of three people and began to wait how things would go.

It took one week for her to calm down and began to make relationships in new family.
For the first 2-3 days she didn’t eat and hid in a different hideouts.
It was the first our cat that has such painful reaction on adoption, so we were afraid for her.

Then, little by little, she became braver. At night she began to eat and get acquainted to new owners.
They told us that sometimes she sit near the door for unknown reason. We responded that this is how she asks to sat her in cage to her family…
On the second stage of adoption (it all was during the first week) she tested the patience of the new owners. She twice pissed on their bed and once even pooped right in front of astonished audience.
But after the period of one week things got better and her behavior stabilized.

Vesnushka isn’t very tame or affectionate cat. She is a little scamp that has her own mind but new owners love her though she’s sometimes prickly.
She likes play and clamber over the furniture.
We hope that her further life will be happy.

The new owners are good people and we like them, but they still haven’t spayed Vesnushka (her age is ~18 months now) despite our recommendations and we can only hope that she won’t made new problems to the owners and they won’t return her.
We love cats and of course take them back from adoption in case of problems, but our flat is already overpopulated so it is much better for a cat to get along with new owners.