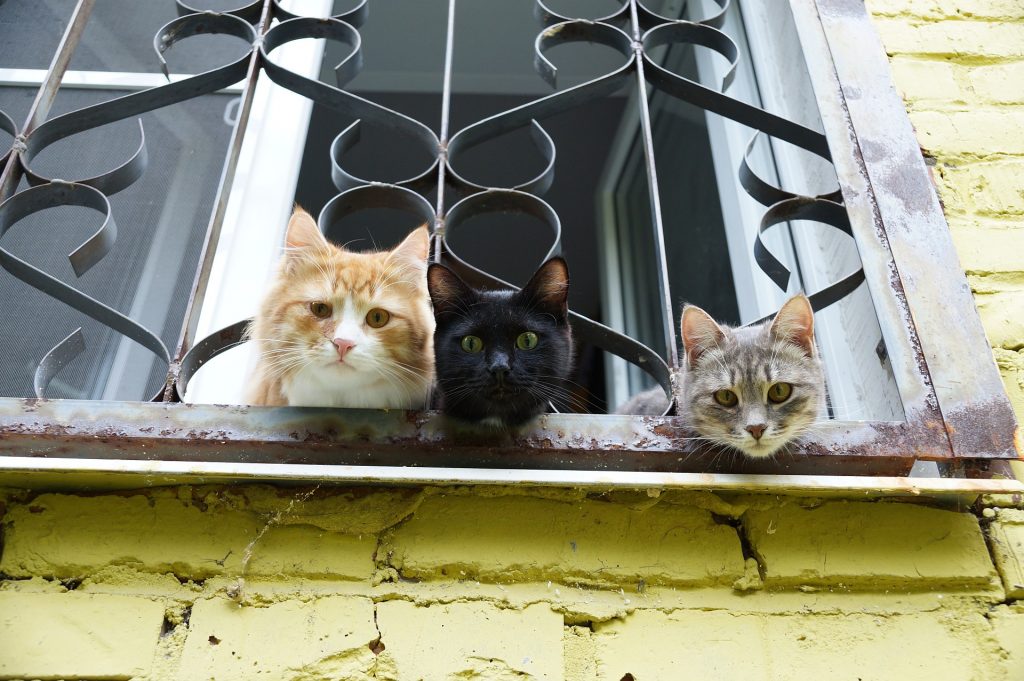 Our story has begun in the fall of 2012 when we moved to the new place and became acquainted to local fauna.
We moved to suburbs into the flat on the first floor. This fact has made crucial influence on our further life, because only in suburbs there are still many homeless cats and it is harder to ignore their problems when you live at the first floor.
Even before, in Moscow, where is no so much cats, my wife manifested strong interest in saving their lives and finding an adoption for them. So, after we moved to suburbs, the thread of our life was absolutely formed by the Fates…
At that time we were unaware of possibility to use social networks and message boards for the purpose of cats’ adoption and therefore the process of finding a new home for cats was excruciating – my wife (and sometimes I) stood at the subway stations holding a cat in a box.

It was physically exhausting, ineffective and sometimes dangerous method because the police didn’t like us and the people that came from the subway could be sometimes out of sorts.
We couldn’t give away the cat to the first who asked and some people got angry about this. At those times we weren’t so experienced as by now, but we, of course, screened people and took their phone numbers if we gave a cat to them.

By the way, the cat at the picture, Chernushka, haven’t been adopted. We took here to the Moscow’s subway at least twice, but couldn’t find a family for her and she was hit and killed by car in our yard.

This torture had been lasting till the end of 2014. A few cat’s had been adopted, one had been returned.
At that time we were not only clueless about social networks but also about cat’s organism, typical diseases, cures, behavioral deviations and so on.
We even didn’t know that three-colored (tortoiseshell) cat can be female only…
Oh, it is worth a separate post to describe how we tried to identify a gender of little kittens…

By the end of 2014 my wife had revealed the power of social networks and had found a few popular forums where animal protection activists were dwelling.
It have changed our life a lot, but I am still not certain in which direction…

The good thing was that we have obtained a much wider audience and since that time we are able to interview people more carefully at the distance and we need to trip to the Moscow (usually) only once – to carry the cat to its new home.
The bad thing was that we faced an overwhelming stream of information from other animal protection activists or people that tried to look like such an activist.
There were a huge number of touching fundraising posts on the specialized forums and a great fight around them, because many of those posts looked suspicious.
We were recruited by one of the “mature” activist and began to work as her PR staff :).
Some of us were carried away and few times we have gotten into little troubles…

Acquaintance with a large number of people that are interested in animal protection and already have gone much farther than we are, shifted the quiescent point in some of our minds.
Before that moment we thought that four cats in the flat is all too much but now we are trying not exceed the number of 12.

Since that time we have been trying to support (to stabilize) the population of cats at least in our yard and occasionally we help other cats that get into our eyesight.
We try to sterilize all female cats to reduce the number of kittens (or rather the number of kittens’ deaths because they almost all die for various reasons) and to find an adoption for kittens that have been born already.
Also we try to find, as quickly as possible, a new home for cats, that are friendly and human-oriented, because, as we know, they will die first.
We are going to describe all our stories in details in this blog.

In the summer of 2015 we took three kittens to our bedroom and tried to live along with them, but it turned out to be impossible. The room is very small and we were unable to sleep at night because of their activity and therefore we fall asleep at the work the next day. 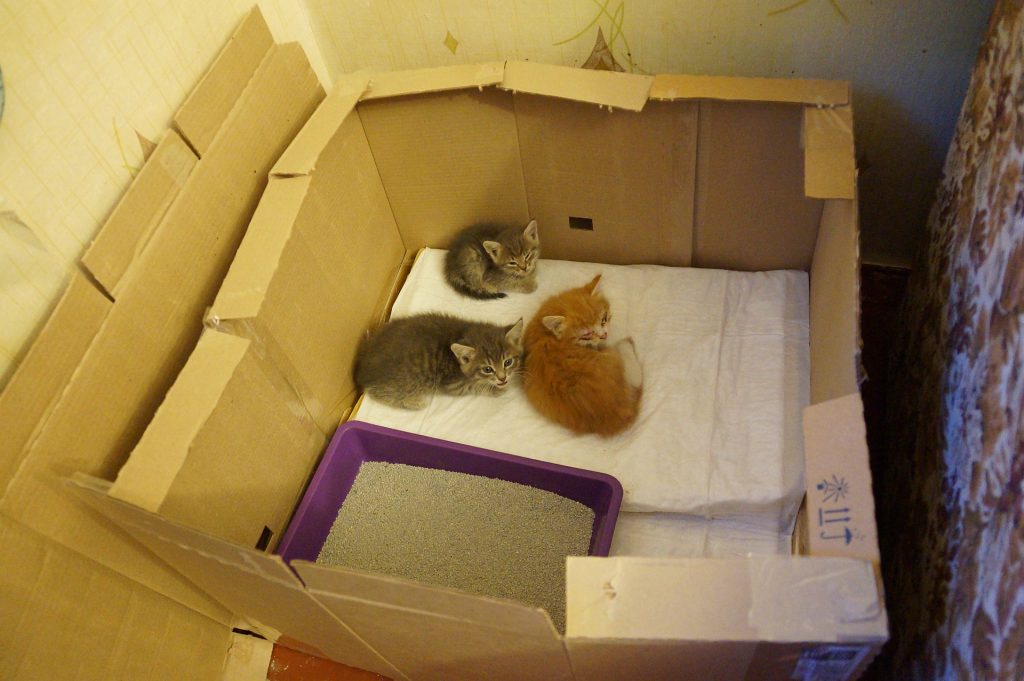 Moreover, roughly at the same time we took one very sick cat which needed it’s own space and cage so the place for our life reduced dramatically. 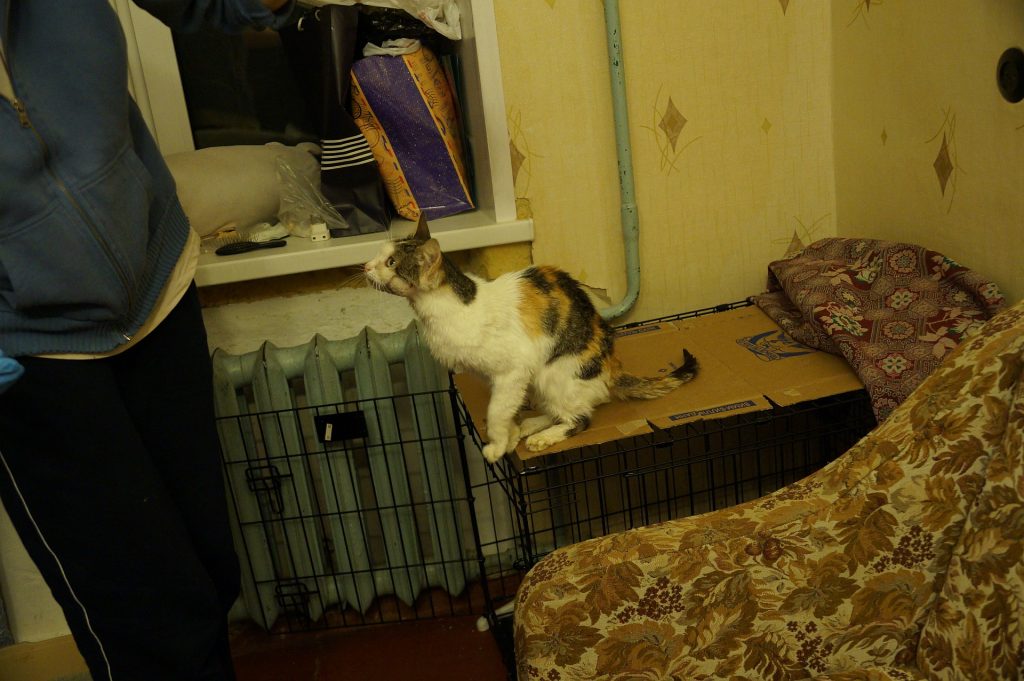 Eventually this room became unsuitable for living of human beings and we left it. We moved to the living-room and left the bedroom for cats and old possessions. Now it became some kind of animal shelter. This is the room that can be seen on our Live Video Stream.
Now this room has two cages on top of bookcase and wardrobe for sick animals, small kittens and quarantine purposes. Also there is a free space where other healthy and inoculated cats live.

We can’t say that we do very much because this field of work has overwhelming size and it is often controversial, but we do as much as we can.
Since the winter of 2014-2015 the economics in Russia in not so good condition and it affects the ease of finding a new home for cats.
The number of people which is willing to adopt a cat have reduced. Partially because of this some cats have been living in our flat for more than a year.
Moreover, it seems that people in еру current economic situation prefer not to spend their money on neutering/spaying cats and we have faced an overwhelming number of abandoned kittens this year (2017).

We do not take any money for the adoption.
Actually, we do this because we do not want to see them dying under our windows.