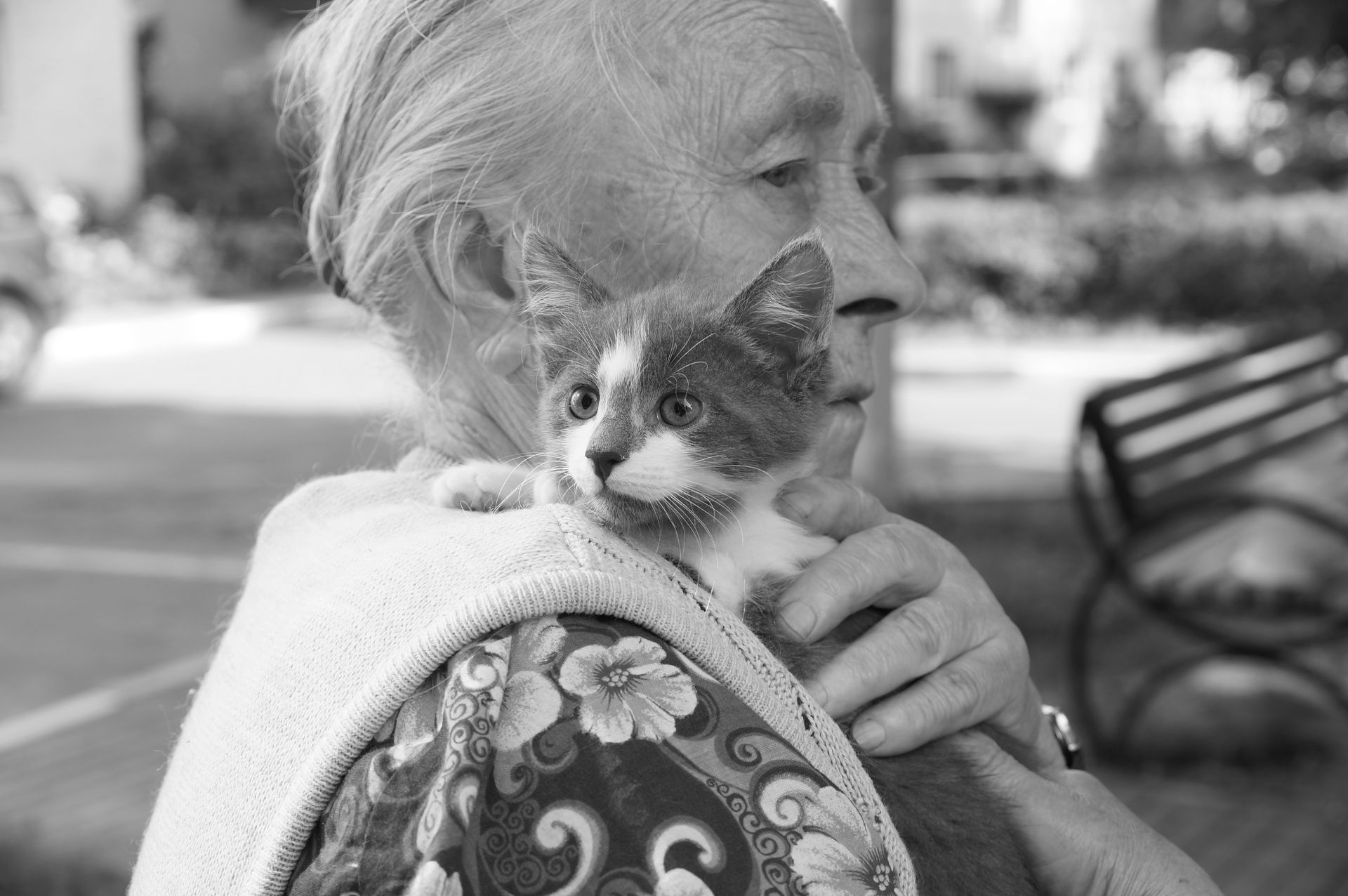 Our acquaintance with Aunt Valya began somewhere in 2012, I remember we consulted when tried to find a home for Chernushka.
She lived here long before us and supported local colony of cats at least since 2010, when we saw her the first time.
As far as we know, all this time she lived alone in a flat with two cats – Shurup and Musya, though the had relatives somewhere.


At first, our relationships consisted mostly of disagreements and misunderstanding.
People who are passionate animal-care activists are tended to think that they obtain the only truth when it comes to the question – what is good for an animal. It leads to suspicions, disagreements and little wars in situations where we could help each other instead. For a long time our relationships with Aunt Valya weren’t an exception, but we always returned to constructive cooperation for the sake of local cats.

Perhaps, she didn’t believe us at first. Didn’t believe that we can find a home for adult cat from the street, because generally no one cares about homeless cats. She didn’t believe that there are people who would come from the far side of the region to take a cat to their home. Apparently, this was the main reason of our earlier disagreements – we tried to find a home for each local homeless cat but Aunt Valya tried to convince us that cats are fine on the street on pasta diet.

She was a person of old views, which isn’t surprising, considering her age, so her perception of cat’s life, acceptable living conditions for cats, acceptable ways of restricting cat’s population etc were… too rough for us.
On the other hand, we were naive idealists, at least at the beginning.

We often saw how conflicting feelings fought in her and therefore she sometimes tried to do opposite things. For instance, I remember many situations when she promised us to help to catch a cat so we could spay it or carry to the new owners (which had been found already!) but after a few hours she comes to us, agitated, and takes her promise back, saying that the cat better off with her.
Because of mistrust and later in attempts to protect us from overwhelming quantity of cats in our flat, she tried to hold back any information about abandoned cats nearby. But she always failed to do that especially if abandoned animal was tame, which means that it is unprepared for living on the street. Her compassion to an animal, caught in a dangerous situation, was very strong and we often were the only way she could use to save this animal.

Earlier she had difficulties to make up her mind on a question what is better for cats – to live on the street or in our room. Both variants has it’s own disadvantages: on the street cats are unprotected from weather and dogs, their food has lower quality and rarely is sufficient, on the other hand our room for cats is like a jail. But we invited Aunt Valya to visit our flat a few times so she could see that cats… maybe not happy but are fine. In the last year she often came (she told me herself) to the window of the cat’s room to spoke with our cats. They, of course, were happy to such unexpected attention and showed off as they always do. So Aunt Valya saw that cats are fine and in good condition and she stopped to worry about this topic.

She also was forced to drown kittens that just been born. It wasn’t an easy task for her and she always complained on heart problems and sleepless nights after such event, but that was the only feasible way to control the population of cats. One particular event of this kind will be described in a separate story “The last child of Nose”.

Anyway, no one here did as many for local cats as Aunt Valya.
She fed cats twice a day (each day!) in any weather around 7 a.m. and 4 p.m.
The view of the bench from our window is inextricably connected in my mind with the image of Aunt Valya who is feeding cats using sheets of old newspaper as dishes. 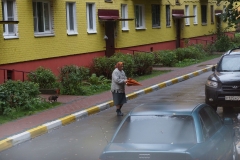 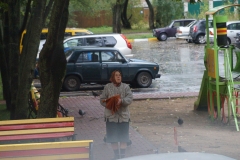 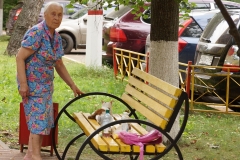 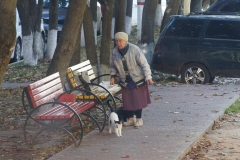 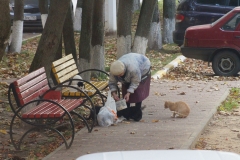 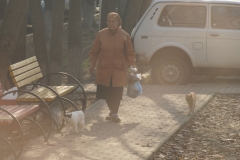 She had been spending most of her little income to feed abandoned cats.
The main ingredient of the food she made was boiled cheap pasta. The pasta was usually mixed with boiled or preserved fish, sometimes pouches. She also had a handful or two of cat’s dry food and a few cheap pouches (kitekat usually). A couple of pouches were being dispensed among all cats and one or two favorite cats got a separate pouch.

Actually, she fed not only cats but birds too. She’d been buying sunflower seeds specially for them and also had been taking out and crumbling bread from the dumpster.

Little by little we began to trust each other.
We’ve been showing her images of adopted cats in their new families and she was happy for them. Especially she was interested in the life of “her kitten” Postrelenok.

She had been helping us to do photo-shoots in the yard so you can see her on many of our posts though images include face only occasionally. 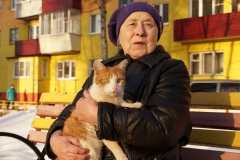 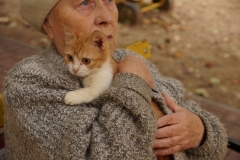 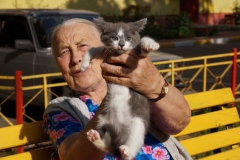 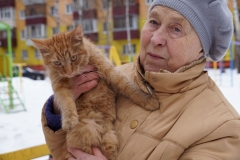 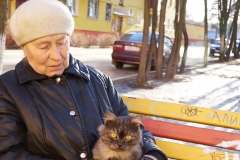 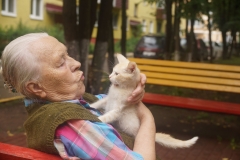 She had been helping us to catch cats for anti-parasite treatment or spaying.
After a couple of years of talks we finally convinced her to spay her own cat and successful result has helped us to get more trust. It also “modernized” Aunt Valya’s views on veterinary problems.

The final step to the state, when we stopped to judge each other too strictly and just accept that both sides are good enough with some slight deviations, has been made on the day when Moos’ka died and we participated in her burial.


Last year Aunt Valya often began talks about the time that is left for her.
One of her cat’s – Shurup died in advanced age a year ago and she lived with only one cat – Musya. Despite the fact that she loved cats very much she didn’t take any of them home, reasoning that she is too old and any cat will probably outlive her, so it is better for them not to lose survival skills.
Apparently she understood that nobody will take care of all her cats after she passed away, though she hoped that her relatives will take care at least of Musya…
This year she asked me twice to take care of her cat in case “something” happens.
It wasn’t precisely clear which cat or cats she minded, but anyway, relatives refused to take Musya after the death of Aunt Valya and we are unable to take care of cats on the street because we have more than 20 of them in our flat and we are on the verge of extinction ourselves…
So we did what we could and took Musya. She is trying to live with our cats now. Her world has turned over.


Two old women have promised (with some reservations) to take care of little cat’s colony, formerly supported by Aunt Valya but we are afraid that they are much less reliable. Time will tell and anyway there is no other options.

Aunt Valya wasn’t our friend. At least I don’t feel it that way. We had significant difference in age and world view, troubles in communication…
But she was the closest person to us, the most close. We were united by (almost) common purpose.
We shared images of adopted cats and stories of their new life with Aunt Valya. We rejoiced together that one more animal had been freed from danger and suffer and had begun a new life. We shared information about the places where discount on pouches for cats could be found today.
And now we are alone here.
All local cats became orphans too.

During the last couple of years Nose was Aunt Valya’s the most loved cat. She especially loved this female cat, because Nose is the only survival from the initial colony which lived here in 2010-2012. Aunt Valya always had a separate pouch for Nose, always tried to make her life safer.


During this winter Nose lived and ate in the safe warm cellar, arranged for her by Aunt Valya.
Who will take care of Nose now?

All the time that we knew her, she kept rather active way of living. Despite the fact that she had a pension, she did a part-time work somewhere, fed cats each day and tried to grow some herbs and flowers beneath her window.
Unfortunately all these activite haven’t helped much to keep her cardiovascular system healthy and she died from heart attack in the middle of the day in the adjacent yard on September 13th, 2018.