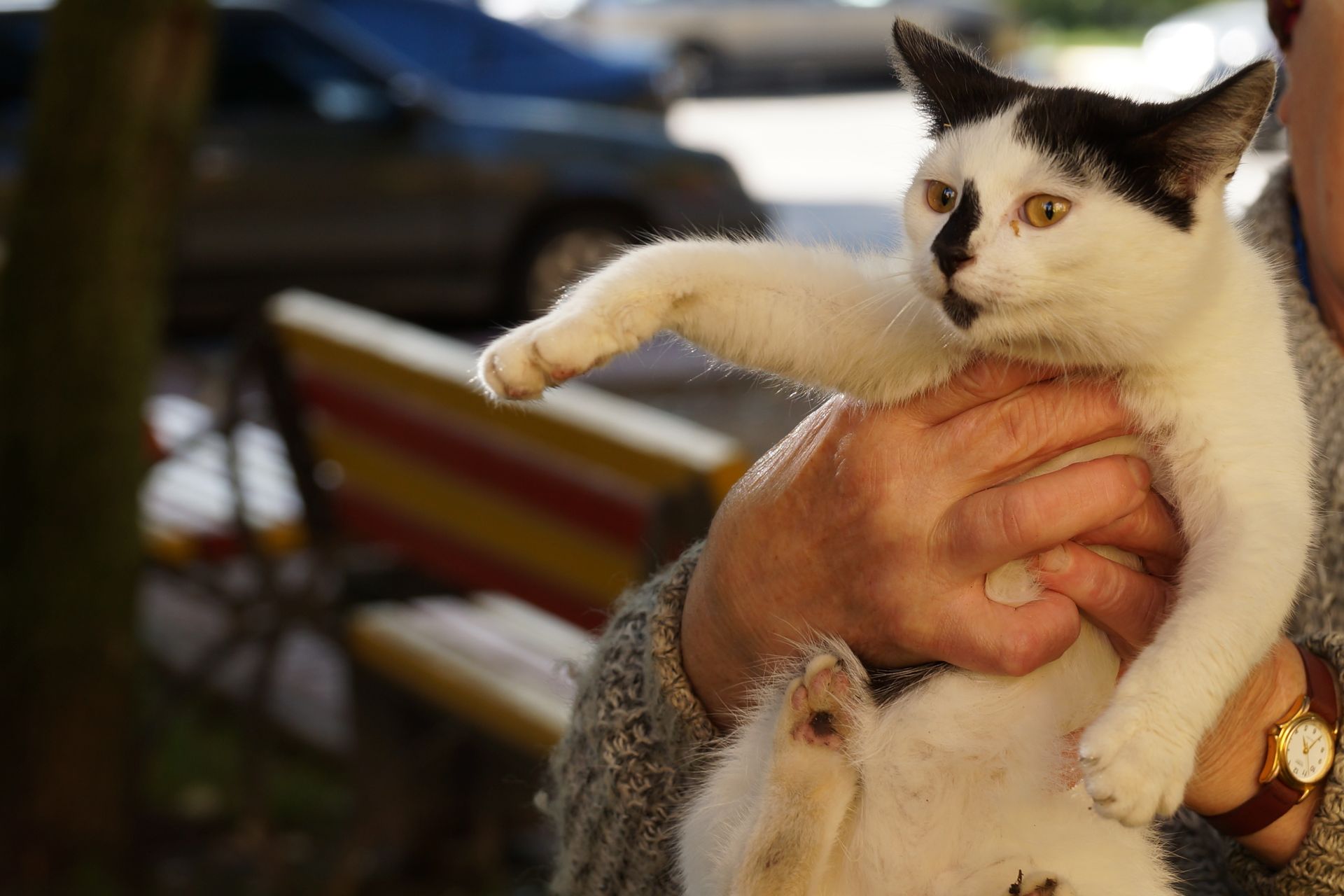 Nose is one of the oldest cats in our yard.
Her first images are from the autumn of 2013 when she was a relatively young cat among the family of other four kittens, their mother and Chernushka. Now, in the beginning of 2018 only two of those cats are still alive. 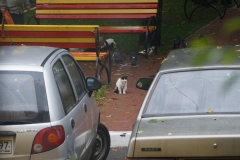 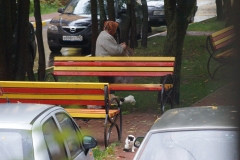 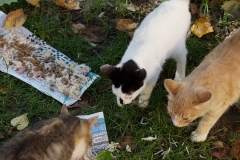 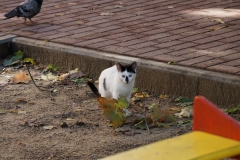 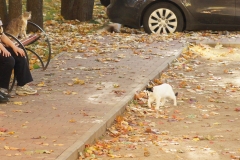 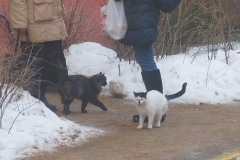 Nose was a kind of “feral” cat from the beginning. It was difficult to take her in hands even for people whom she knew and she always kept distance with strangers and dogs.
Maybe that is why she is still alive.
But time slowly does its work. They say that maximal lifespan of a cat on the street is about 4-5 years. It seems to me that by this time a cat becomes tired of running and hiding. Becomes tired of necessity to be wary all the time. And then it gets in trouble. I saw this happened to Mus’ka and now I see how Nose has become less cautious.

We made one photo shoot of Nose in 2013, but it was actually impossible to find a home for her because she was “feral” since birth. 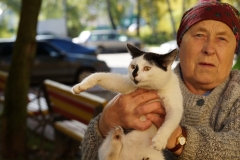 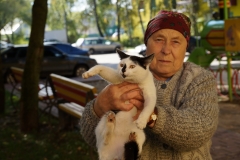 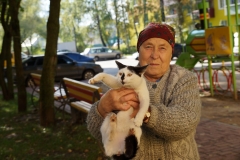 Nose had kittens few times. Most of them died by unknown reason. Some were drowned by Aunt Valya immediately after birth in order to reduce the population of local cats.
Sometimes we saw how Nose is carrying her children from one cellar to another in obstinate attempts to save them, but they died anyway.
In the post about Belobrysska we mentioned how we tried to save some of Nose’s kittens but failed to get a cage in time and those kittens vanished in less than a week.

I must say that the drowning of kittens isn’t an easy task for Aunt Valya. She is always complaining on problems with heart after such events, but she is one of a few women who feed cats here and she can’t sustain a larger population.
Unfortunately the culture of sterilization of animals has a hard way to minds and hearts of people here.
We had been negotiating for a long time with Aunt Valya, convincing her to help us to catch Nose for spaying, but sometimes Aunt Valya wasn’t ready – sometimes Nose was too exhausted because of her last pregnancy.

In the autumn of 2016 stars on the sky came in a such position, which had made the spaying of Nose inevitable.
First – Aunt Valya had stopped to afraid of the neutering and had agreed that this is a good idea. She accepted this idea in general after we had convinced her to spay her own, rather old already, cat.
Second – Nose brought five kittens in the end of the summer 2017. Four of them had been drowned by you know who. This event had severe impact on the health of Aunt Valya and she finally agreed to help us to catch Nose when she restores some weight after the pregnancy.
Third – after five years on the street Nose has become less cautious and has started to take food from us so we sometimes could catch her even without help.
Fourth – Aunt Valya left one of the last Nose’s kittens alive for herself, but she was very afraid for his fate because… Because Nose is so stupid sometimes… Nose can try to hide her kittens so meticulously, that eventually kill them herself during a number of transportations from one cellar to another. That is why this last kitten got into our house and we became really determined to spay Nose for we really didn’t want to have such surprises in the future. 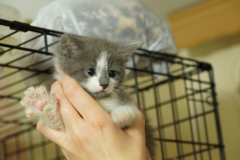 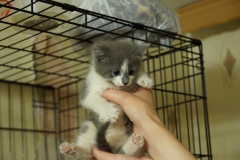 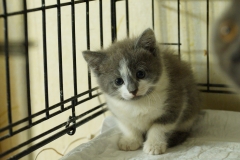 So, with help of Aunt Valya Nose had been caught, spayed and put into the cage in our flat for 10 days for rehabilitation after surgery.

During the operation vet doctor has also examined the overall health condition of Nose. It turned out that for a five years old cat from the street Nose is OK, but she has already lost almost all her teeth and has bad condition of jaws. Actually Nose has only fangs and frontal teeth now. 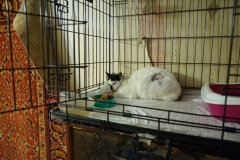 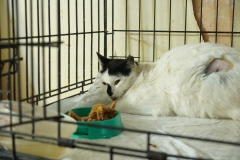 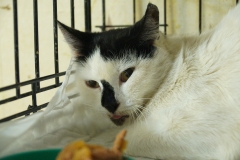 I must admit, that the behavior of Nose during her rehab was unexpectedly good. During those 10 days it was obvious that she is frightened. She tried to lie still when we were near the cage, tried not to look into our eyes and so on. But she didn’t fight with us, didn’t try to bite us or escape from the cage. We think that was very good behavior for a cat that had not any experience of living in so small space with people around.

Near the end of her incarceration Nose had an opportunity to live for a few days with a bunch of kittens. She wasn’t very enthusiastic about this event, but once again she manifested her decency.

After 10 days we removed stitches in the vet clinic, gave her a few drops of Stronghold on the neck and let her be free. Nose was very happy and immediately ran away from us 🙂

Now, in Winter 2018, Nose lives in the cellar almost all the time. Aunt Valya individually feeds her two times per day, because after the death of Mus’ka Nose is her favorite cat.

UPDATE Spring 2018
All the winter 2018 Nose has been living in the cellar and now appeared on the street. Her former boyfriends are still trying to get some attention, but they are out of luck now.

UPDATE Spring 2019
After the death of Aunt Valya Nose lives in the cellar right beneath our flat. We feed her once a day in the late evening and two old women feed her in early morning.
I suspect that Nose can hear us talking in the flat because she often manage to appear on the porch right before I go out of the building. I imagine she’s sitting on pipes in the cellar and listening – whether we go out with food right now or not.

UPDATE Summer 2019
New images of Nose and her fellow cats. Images made by Gcam Android app so they have slightly unusual colors and details, but this app literally revived my phone’s camera so I became able to make shots in bad light conditions. 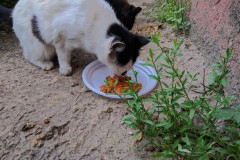 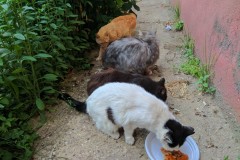 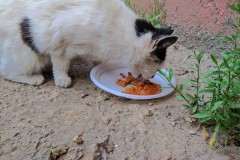 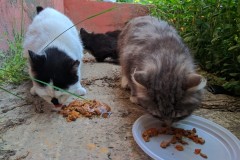 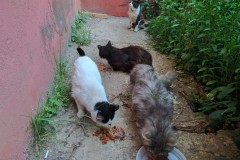 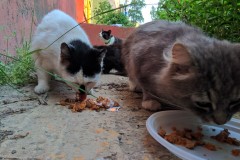 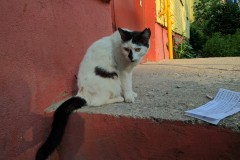 The cat who saw the rainbow bridge and came back.