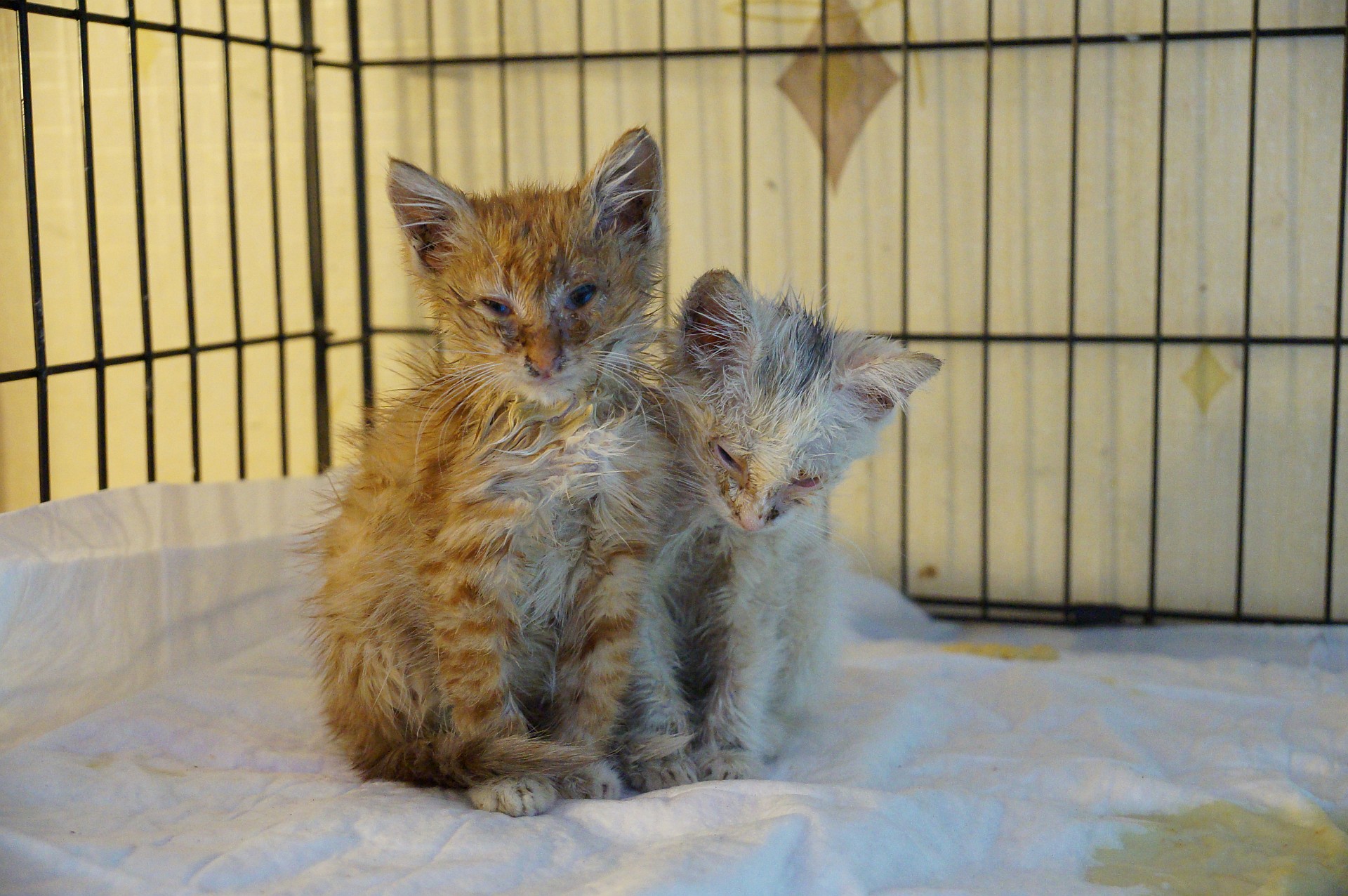 This is a combined post about two our inhabitants – Ginger and White Pokemons.
They have been keeping together for a long time so it would be difficult to separate their stories.

These pokemons represent one of the disadvantages of to be known on social networks and among other people that are interested in animal protection.
Pokemons have been brought to us by one of the activists. She didn’t ask us anything, just came to us in her red Mazda and unloaded two half-dead creatures.

Of course, we couldn’t refuse but we already had 6 cats and with these two it was too many.

We tried to find some help via social networks and even raised some money for these kittens (100-200$ as I remember).
But more important that one guy helped us to show them to the vet clinic (even twice!). We have no own car and at that time (the summer of 2016) we were already exhausted by the cat-mess in our apartment. It was that summer, when we left our bedroom for cats.

The interest to Pokemons from the society was fleeting and we were left alone after a few weeks.
As I remember we have spent a few hundreds dollars only for immunomodulators during their treatment…

They were (especially White) in bad condition.
Both had lichen, their eyes became glued every day and White was very weak. Actually, we were afraid that she would die.
For the fist month or two of their existence they had a strong yellow color – not because of improper white balance but because of the cure from lichen.

One rather strange thing happened to Pokemons. They both liked condensed milk very much. Due to bunch of physical laws and circumstances they usually spilled a good portion of milk on their necks.
Milk then dried and vanished from their necks together with fur…
Maybe it was because of the poor condition of their fur, maybe because they clean themselves too much.
Or maybe… maybe they liked milk much more than I can imagine and didn’t want to loose a single drop…
Anyway, few weeks they lived without a fur on their necks.

They have gotten a proper treatment and after a couple of months their doings become better.
They gained weight, recovered their fur and become look like a trite yellow cats that you can see on the streets every day.

Pokemons restored their health but unfortunate beginning of life, a large number of medical procedures that they had to tough out and relatively long time in the cage (we had to wait to become sure that lichen has gone) affected their psyche.
They have become The Evil Pokemons.
As they grew larger it became impossible to do injections to them, because they fought desperately. I still have a scar on my hand after the last attempt of inoculation.

After three months in our home (in the cage because of lichen) we still had a hope to find them a home so we made some PR photos.

You can see on some pictures that they had large tummies. We think that is because they were forced to stay put and keep sedentary lifestyle.
Unfortunately, we had no choice either. We couldn’t let them disseminate lichen and also we had no resources to force their treatment because two months later we took 4 kittens more.
Pokemons also don’t look very brave on these pictures. Actually, they tried to find a hideout all the time.
Nevertheless, sometimes photo sessions was funny. For instance, Galaxy would came and entertain us using her acting skills.

I assure you, that wasn’t a low kick. It wasn’t a kick at all and Galaxy didn’t die belly-up or fell unconscious. She’s just a good actor and uses any way to get acquainted to new people or even Pokemons.
At that time Pokemons were on quarantine and Galaxy hid from us and got to the room on the sly.

By the end of summer we concluded that the weird behavior of our Pokemons might be caused by their life in cage.
We began to let them walk and play in the other room for few hours a day. But at that time we already had four additional kittens and we didn’t want them suffer from living in cage and be stressed like Pokemons, so they took turns – 2 hours for Pokemons, 2 hours for Belobrysska and Banditka, 2 hours for Timophey and Vesnushka – at last, our “own” cats were allowed to return from the kitchen…
Frankly speaking – it was terrible. Little kittens fly and destroy everything on their way…
And when we allowed more then two of them to play simultaneously – it was a complete disaster with mayhem and mutilation for humans.

After we allowed them to exercise they became more fit, but eventually they gained weight again after spaying.
Speaking of spaying, on the pictures below you can see two Pokemons are riding to the vet clinic, waiting at the clinic, and two weeks later, after successful spaying with bald patches on their flanks.

After they were freed from the cage and settled among other cats they became less timid and more tender.
(Actually, I do not think that the cage had such harmful effect. I think that this is a trait of their nervous system – they are a little feral.)


We have been trying to find a new home for Pokemons.
White Pokemon have even ridden to see one of the applicants, but didn’t like her much and returned…
They are mature cats now.

Update Summer 2019
Pokemons live well. White is somewhat shy and refuses to leave cat’s room. Ginger is more active so it spend much time with us though both of them are always wary and anticipating some infringement on their well-being from those two unpredictable bald apes…
We are still unable to find a new good home for them. 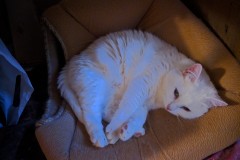 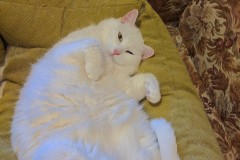 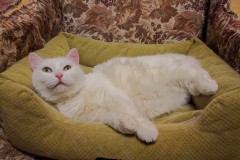 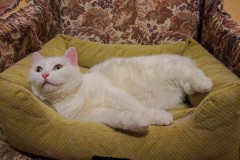 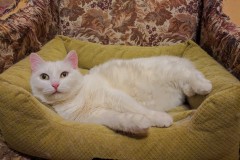 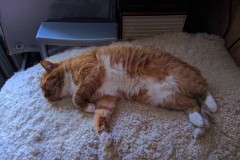 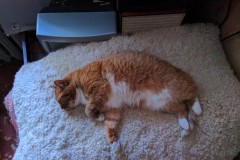 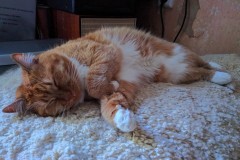