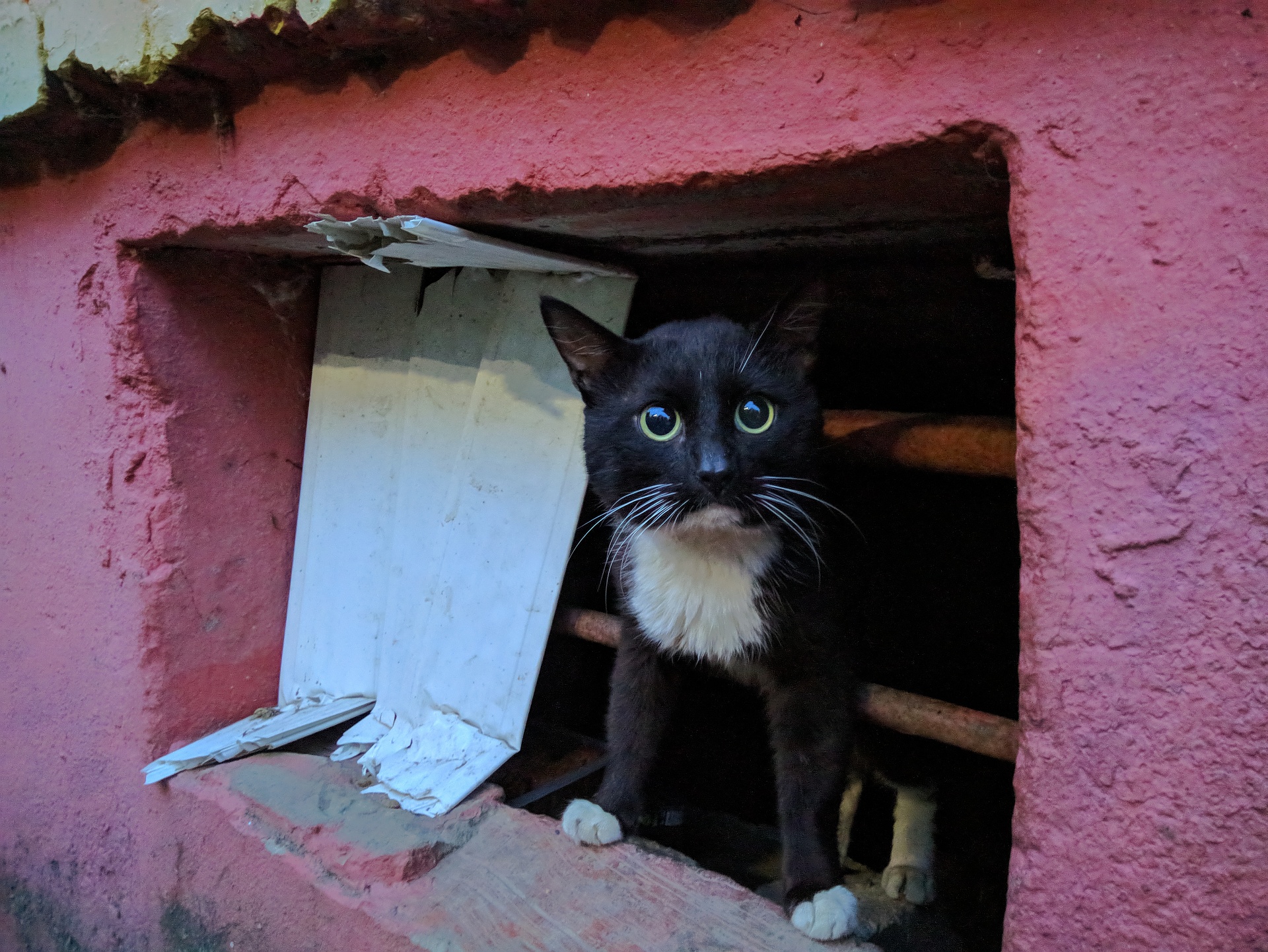 I know this cat for about 2-3 years. When Aunt Valya was still among us she told me that this cat has the same owner as Glafira and taught me to discern this cat from a couple of similar animals by white tip of his tail.
Aunt Valya didn’t like this cat because he wasn’t kept inside by his owner and was allowed to walk freely on the street. This freedom, as it usually happens, came at the cost of poor feeding from owner. So Aunt Valya was forced to feed this young cat with good appetite along with other members of colony of nine or so homeless cats.
The same story was with Glafira. By the way, is she still alive? It was a year ago when I saw her last time.

During the last year (this was mostly cold, winter time) this cat has been visiting me often when I fed local homeless cats in the evening. I began to call him Muraena because of his habit to stick out of the cellar window.


He usually sat just behind the cellar window and waited when I put his portion of food on the windowsill, while all other cats form a little furry whirlpool next to me in anticipation.
He didn’t live in our cellar, though. He came in the evening during the feeding time and went away somewhere after he had his meal.

I saw Muraena almost every evening from the autumn of 2018 till spring 2019. Gradually he became more tamed, he began to came out of the cellar window and agitatedly ran circles around dishes, awaiting food. He was obviously a young, active cat with good appetite.

On May 12, 2019 something strange happened. When I, as usual, fed cats in the evening, Muraena came to me. He’d been waiting for me under a parked car with an other cat – this moment had been caught by out IPCAM. Muraena brings up the rear.

It is not obvious from the video but the effort to cross the road cost him all the remnants of his energy. He came to his dish and sat down in some meditative state. He lowered his head to the dish time after time but didn’t eat. He looked at one point.
The sun had set already and I could have gone home, leaving him on the street because I couldn’t clearly see what he is doing with his dish.
Moreover, initially I had mistaken him for another cat because I couldn’t see his tail clearly…
Luckily, I noticed that the cat behaves strangely. I tried to pet him, to stroke his head and saw that the cat do not notice me…
He was sitting, looking at one point and all his muscular activity were aimed to maintain his posture.

After some hesitation we took the cat home.
I hesitated because all this business with cats had had already significant and harmful impact on our lives so I try to reduce the number of cats in our flat which is usually about 12 in winter time and 20-25 in summer.

But we can’t leave a cat in such condition on the street. I know, this is most likely an excessive humanization of animals, but it looked like this cat came to us to get help… Asked us for help the way he could.

We had a free cage so I picked him up and put there. 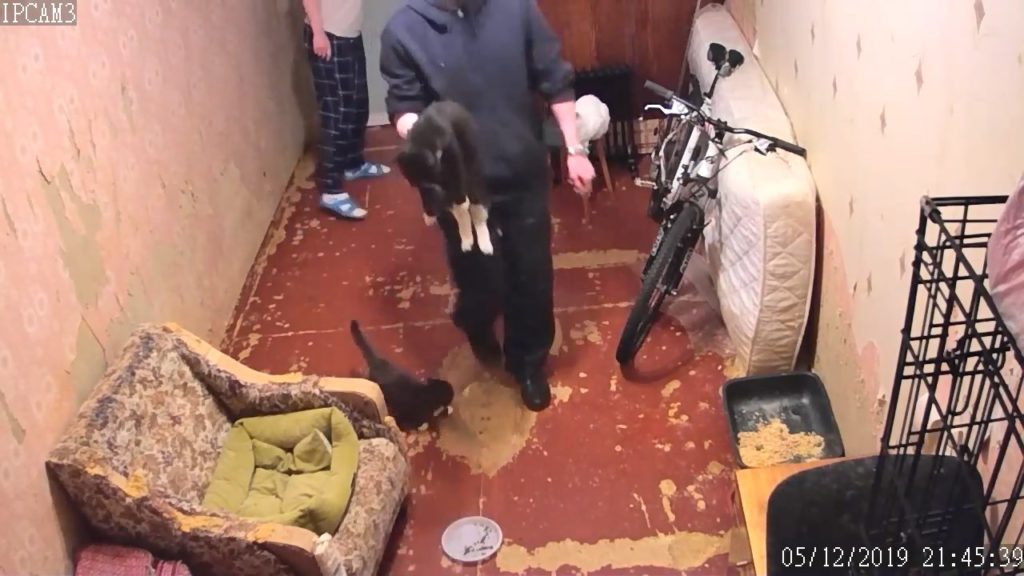 After the story of Little Marquis we decided to treat this cat without any “help” from vet-clinic. It is expensive and excruciating procedure for us. Moreover, it is useless. Clinics are good for surgery. That’s all.
So, we began to treat Muraena by usual means, though we didn’t (and still don’t) know what happened to him.

The cat came to us in rather good condition. He had no signs of dehydration, he was able to sit and had normal weight.
Maybe he felt pain in abdomen because he screamed loudly when we moved him from the cage to the bathroom, where it was more convenient to us to do injections etc.
So, after a couple of attempts to move him, including the usage of makeshift stretcher, we decided to do all treatment right inside the cage.

Since his arrival we began to use antibiotics (Ceftriaxone).

During the first period of his residence in our flat his state had been continuously deteriorating . He didn’t eat. He didn’t drink. He was losing weight quickly.

We were especially dejected because the cat had signs of neurological problems. He had very weak reaction to our presence near the cage. We even sometimes thought that he had become blind. He slept with opened eyes and apparently often fell asleep shortly after the beginning of eating.

We were sure he wouldn’t survive, but anyway, began to do injections of glucose and Ringer’s solution in addition to antibiotics.
This quickly proved that his kidneys work well, and also proved that he doesn’t know how to use his toilet properly. During the time of his residence we used enormous quantity of disposable underpads because Muraena often pissed right where he sat.

So, without any hope we did injections to prevent his dehydration as well as antibiotics.
Later we added immunomodulators.

During the first week or so his condition had been deteriorating, he began to look like a furry skeleton drenched in urine.
Sometimes I stood near his cage, looked at him and reminisce what vigorous and proud animal he was. He always kept at a distance so we usually could only see the white tip of his tail but couldn’t touch him. And now… Now very few people care about his tail or pay attention to it… And even the cat himself is now apparently seeing some other world and do not care about his tail which is dirty beyond recognition.

He had a horrible look and odor and almost refused to eat.
He ate a little from Felix pouches that we gave him, but was mostly interested in liquid part.
His meditative state, which urged me to take him home, retained and was especially noticeable up to 10th day of his residence. It was especially obvious during the eating.
Even in his worst time he showed signs of excitement when I came to his cage with food, but he actually ate very little and the liquid part only. He ate for some seconds then began to slow down, to lower his head and eventually sat with his nose in a dish and detached look.
For more than two weeks he had a crust of various food on his chin and nose. 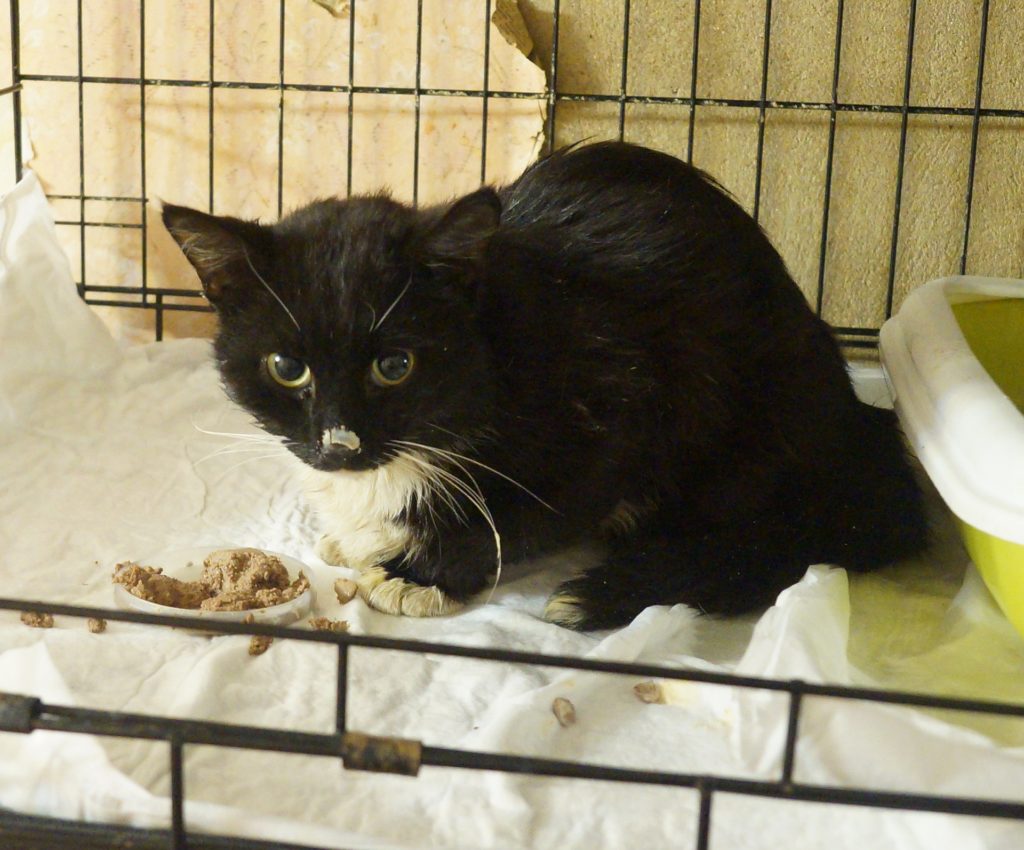 But despite the fact that he ate very little – he ate anyway. And so we could see that his intestine works also. But it seemed that the act of defecation was very difficult and painful for him (at least first couple of times) though feces looked good, in my opinion.

Once I saw him after such an event and I thought he died! Apparently it took all his strength to get on the litter box and do what he supposed to do there. He had no energy to get back. 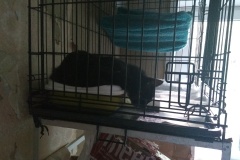 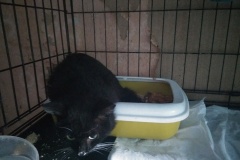 After the first week or even earlier we lost the ability to do intramuscular injections because we couldn’t find enough muscles in the cat…
So, we did all injections under the skin. And there were very many of them…
Muraena didn’t object to our treatment but screamed when we tried to move him inside the cage, so apparently he had abdominal pain for about two weeks or so.

Once, when I was watching his strange attempts to eat, I noticed that he is trying to eat all types of food in the same manner – by licking it. He didn’t try to bite, didn’t do any sophisticated movements by his tongue – just stuck out and pull in his tongue. Therefore I decided to bring him a food that could be eaten in such way.
I brought him sour cream.
I don’t know why we never gave a treat to our cats by giving them this food… We used condensed milk sometimes but never sour cream.
Muraena liked sour cream very much! Even is his bad condition we could see that he was especially enthusiastic when he saw us bringing him this food.
Somewhere at this point of time (two weeks after arrival) his condition began to improve slowly. We still did full range of injections, often distracting him by a small plate of sour cream during the procedure… 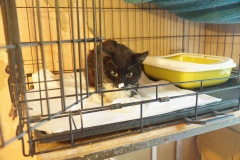 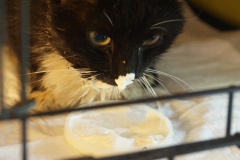 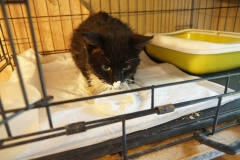 Day by day his gaze became more intelligent and self conscious. He became an active animal and began to resist our injections.
By this time he had large bald patch on his back because of multiple injections.

At this moment we made an attempt to stop our treatment but the cat instantly collapsed to its unhealthy meditative state, so we continued to make injections until he became too strong for us 🙂

He began to eat and to drink very much. His usual meal (one of three a day) consisted of at least two Felix pouches, after consumption of which he was drinking much water.
We were very happy despite the fact that he never had learned the way litter box should be used…
We kept him in a cage for a few weeks more (about 50 days in total), giving ample of food, changing water and underpads. During this time he gained his usual mass, cleaned himself pretty well and the bald patch on his back almost disappeared. 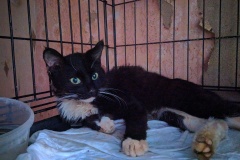 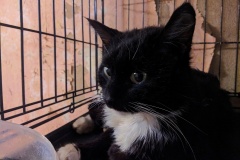 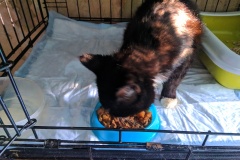 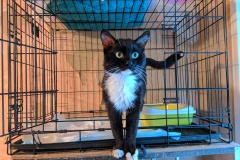 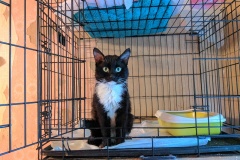 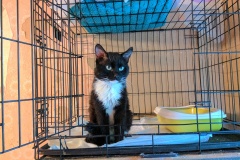 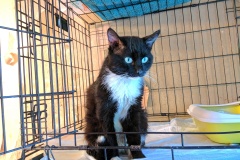 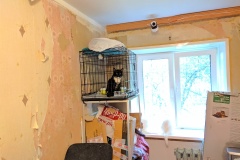 We didn’t want to let him out on the street after all these efforts to keep him alive because there are many deadly hazards for cats on the street. So we procrastinated the time when decision must be made, but then, as with Glafira, we faced the situation where we have no choice. We got a call from a woman, whom we scarcely knew, who told us that a mother-cat with three kittens abandoned on the street in the adjacent yard in a small fecal pump package box.
The box was clean but anyway I see very sad irony in its origin.

We decided to free our captive, which had been sitting in the cage for 50 days already and put there a cat with kittens.

Muraena didn’t show any grievance because of his incarceration, he was friendly and usually in good mood, he never tried to escape from the cage so we thought he had enough life on the street and want to stay with us (with perspective to find a new owner). So we very reluctantly let him out.

Apparently, we misinterpreted his friendliness which he demonstrated being incarcerated, because when we freed him to the street he run from us like hell 😀

It’s been 2 months since that day. As far as I can tell Muraena feels fine and he comes to me in the evening time after time to get some food.
It seems to me that he looks disappointed… Maybe he is waiting for sour cream? 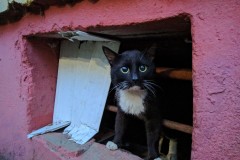 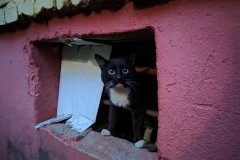 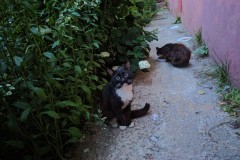 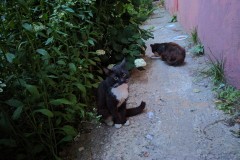 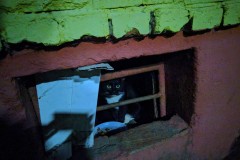 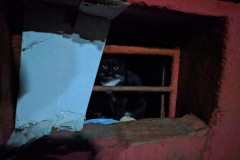 Cats have no 7 lives