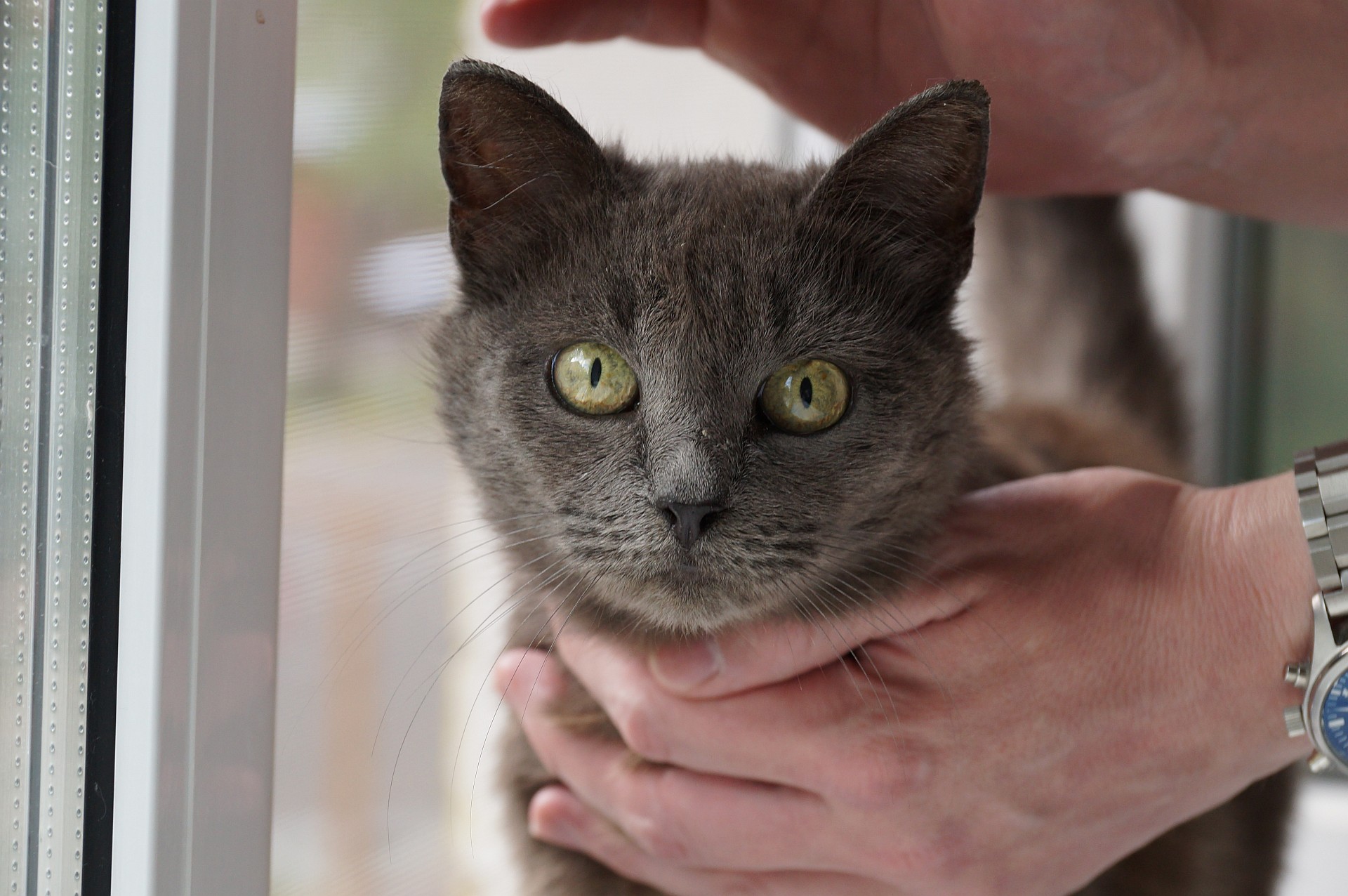 We call her Glaphira.
We picked her up at the yard recently – in May 2017. She is not a true homeless cat but her owner abandoned her and intended to put her to sleep.

Glaphira lived in our yard and the old woman, who feed cats, said us that this cat behaves strangely. The cat had a large belly and tried to lay on a cold surfaces.
We decided to show this cat to the vet clinic.
The owner of the cat wasn’t interested in her life very much and said that she is an old cat and it doesn’t make sense to mess with her treatment. The owner even intended to put this cat to sleep by using anything available and cheap.

In the clinic was revealed that this cat is just pregnant. We decided to spay her.
Roughly two years ago we decided to spay all female cats in our yard (Trap-neuter-return). Not strictly “all”, because we are realistic, but as much as we can.
It is controversial decision but nobody knows absolutely righteous way to control cats’ population.
There is a problem also, that it is difficult to return spayed cat to the street, because this place is unsafe. At first glance we have a bright, colorful and clean yard but actually it is a bad place for cats because there are many cars, which go through on high speed, and many homeless dogs which like to kill cats for nothing. I knew a number of cats that died under a car wheels or was strangled by dogs. Therefore usually we try to find a new owners for spayed cat and usually we fail, so we have more and more cats in our apartment 🙂

Anyway… Unfortunately, there was a throng in the clinic and doctor couldn’t perform the operation in time after injection of anesthetic. Glaphira waked up during the operation and the doctor was forced to make an additional injection.
Operation seemed had finished well and we took the cat to our home. 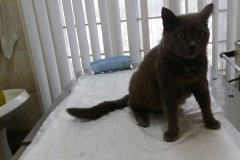 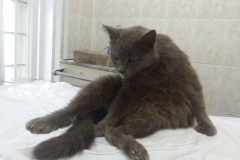 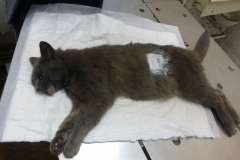 After that, during two days we scarcely slept because Glaphira was unconscious all that time.
She frightened us a lot! All our other cats regained consciousness in a few hours after sterilization. Often during the way to home.
We moved her eyelids, used eye drops to retain her opened drying eyes. Did injections of glucose…
And slowly, very slowly by the end of the second day she regained consciousness.

After she had fully restored we made some PR photos and now are looking for a new home for her.

Now she is still sitting in the cage, because we were unable to give her anthelmintic pill (she fought with us) and she also has some problems in throat.
Sometimes we see her saliva mixed with blood, sometimes she produces strange sounds like something is disturbing her in her throat…
We are too tired now to go to the vet clinic again so we hope that Glaphira will become better in the calm, safe place with ample food.
There are already some signs of such recovery.

UPDATE
At the end of July 2017 we took three kittens consecutively.
When we took the first (about July 20), wobbly kitten, we had to free Skovorodnik from the cage, because this cage was needed for the kitten. It was possible because Skovorodnik had successfully passed his quarantine period, had taken all prescribed medications and had been inoculated by that time.
When the third and the fourth kittens arrived we were forced to empty Glaphira’s cage, but we couldn’t let her live among other cats. Because of her resistance we couldn’t give her even anthelmintic pill, let alone inoculate her.
So, we returned her back to the yard to the woman, which have been feeding this cat last year.
Glaphira didn’t stay on the street for a long time and returned to her owner’s house. Now she lives there, as we were informed.
We didn’t record the process of releasing but will take some pictures of Glaphira’s new-old home by occasion.

UPDATE 26.09.2018
This autumn Glaphira has been expelled from the home again. She appeared on the street scrawny with bad, half-yellow fur. And she is always hungry.
The bad time for her, because there is no Aunt Valya already and support from other old women is much smaller.