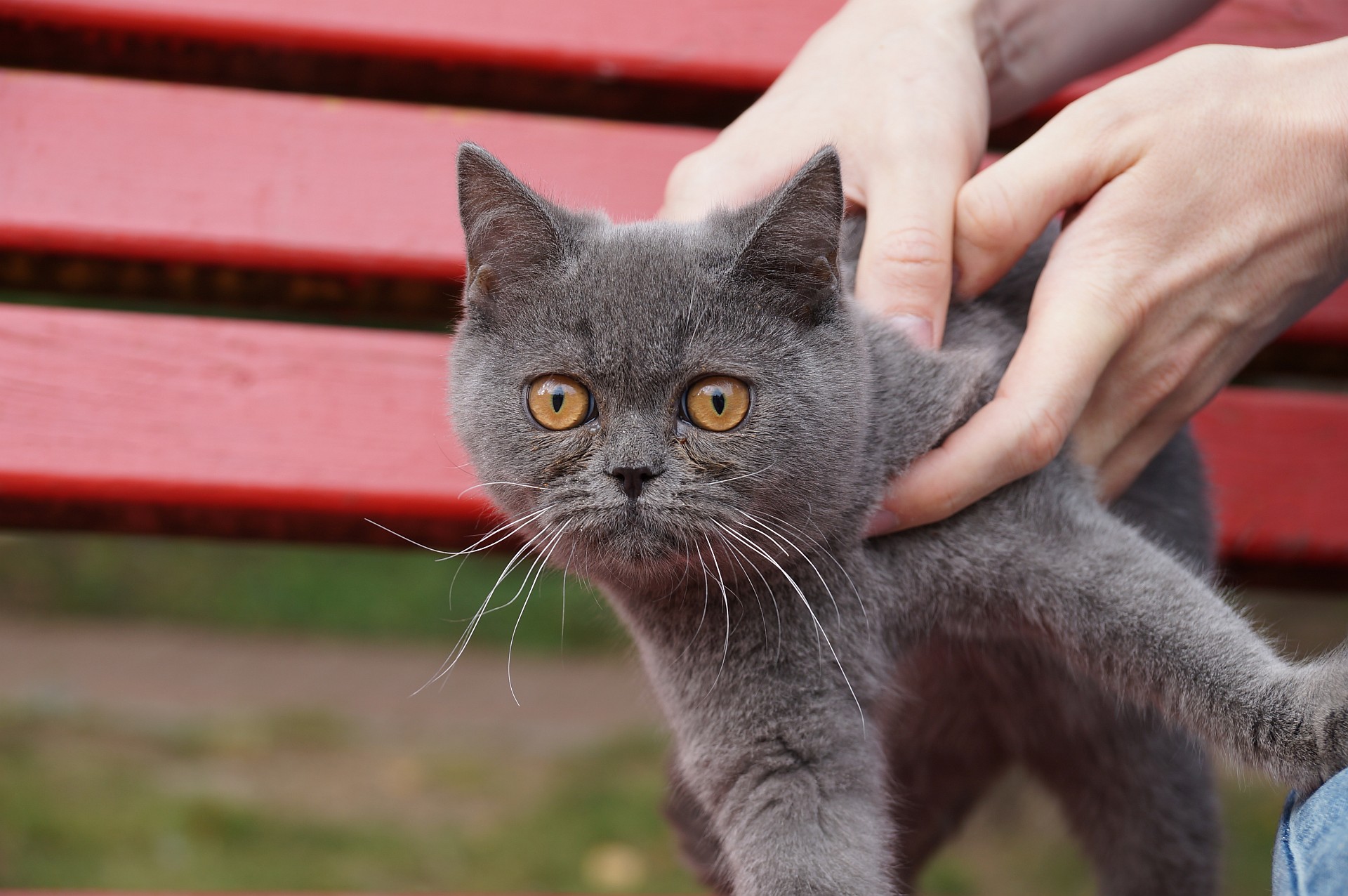 We found her accidentally one evening in the middle of Summer 2017. We actually tried to find another kitten that, as we’d been told, had been seen a few times in our yard during the week…
But we found this wobbly kitten instead.
Obviously, she didn’t come to our yard by herself because she had very limited ability to move.
She could barely stand on four legs.

We took her home because she wouldn’t survive outside even one night.
This was the first time we saw a kitten with such illness. At first we thought that she had been hit by “something” and her condition is a result of trauma.
But later, considering her thoroughbred-like look, we concluded that her condition is a result of unsuccessful attempt of breeding.
We later found on the Internet that such syndrome and also problems with joints are common result of layman-breeders work especially for Britain cats.
For instance, the family, which adopted our Little Rag, later took a very ill Britain-like cat who has many problems with joints. 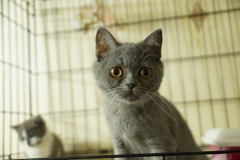 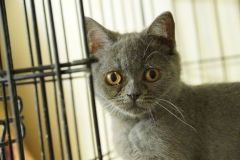 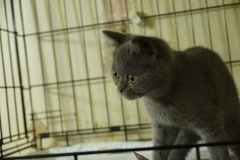 We didn’t know what to do and decided to wait for a couple of weeks and then maybe put this cat to sleep if her condition wouldn’t get better because she couldn’t move or eat without significant efforts. We also didn’t believe that we could find an owner who would like to take care of such an ill cat.

For the eyes of a man, who is very far from medicine, but has read a few books on biology in his childhood (it’s me), the cat had a cerebellar disorder.
Her condition could be described as the loss of coordination and the sense of balance because she staggered, often fell etc…
But more likely she was unable to control her muscles with required level of precision. It could be clearly seen when she ate, because her movements resembled those of chicken. She didn’t miss the dish, but accelerated her head too much toward the dish, when lowering it down, and then jerked it upward to prevent the hit. Between these two convulsive movements there was a tiny moment when she somehow managed to pick up a morsel of food…

As we have found out later from the books and on the Internet, animals with such disease can gradually adapt to their condition and live almost normal life in predictable environment.
We also noticed that our cat have no problems with her litter box, though it was sometimes difficult for her to get there and to return back.
She also turned out to be a very affectionate cat, but it took some time for us to recognize her movements as a caress.
And finally, she was a very nice cat so we quickly forgot our idea to put her to sleep.

We didn’t show her to the vet clinic but consulted there.
Doctor said that it is difficult to be certain what happened to this cat. She could have been hit in her childhood or had a trauma during her birth.
It also could be a genetic disease, which is not uncommon among purebred animals.
At last, the mother of this kitten could have panleukopenia virus which infected our cat while she was an embryo or a little kitten.
Anyway, our cat can live a long and happy life if we find a good owners to her.
We also should avoid inoculation at all or at least use vaccine without anti-rabies component.

Then we made a photo-shoot and began to look for a new owner.

It was a difficult task because there are many fraudsters who would like to take an injured animal and than collect money “for treatment” on the Internet.
Time went by, our Wobbly Kitten became a nice cat. Almost all the time she’d been sitting in our flat in the cage along with son of Nose. We were sorry that she is forced to sit in so limited space but we couldn’t let her live among other cats because we couldn’t inoculate her and didn’t know the origin of her condition. But we understood that she need more space and more diverse experience to improve her ability to move and we tried to find a new owner for her as soon as possible.

Gradually her ability to move became better and better though she didn’t become a normal cat of course.
In September 2017 we made another photo-shoot and recorded a small video.

As soon as we put her on a free space she began to run and we became sorry that we force her to live in a cage.

In the beginning of October 2017 we got a call from a married couple which had a female Britain cat and were looking for a friend for her so she wouldn’t be so alone when they are at work.
Mother of the husband is a regular visitor of various message boards, concerning the animal protection, and she recommended our Wobbly kitten to her son.
We had a lot of conversations with this family by the phone and became convinced that they are responsible adult people who decided to take care of this cat.
Wobbly cat quickly accustomed to the litter box (which has unusual closed construction) in the new home and as far as we know don’t make any problems for new owners.
She was inoculated by new owners, according to the recommendations of vet doctor.

We are happy that Wobbly cat now has a space where she can run and play. She also has a friend for active games and good food.
She became a large adult cat now so it is difficult to distinguish her form the other cat when she is not moving. 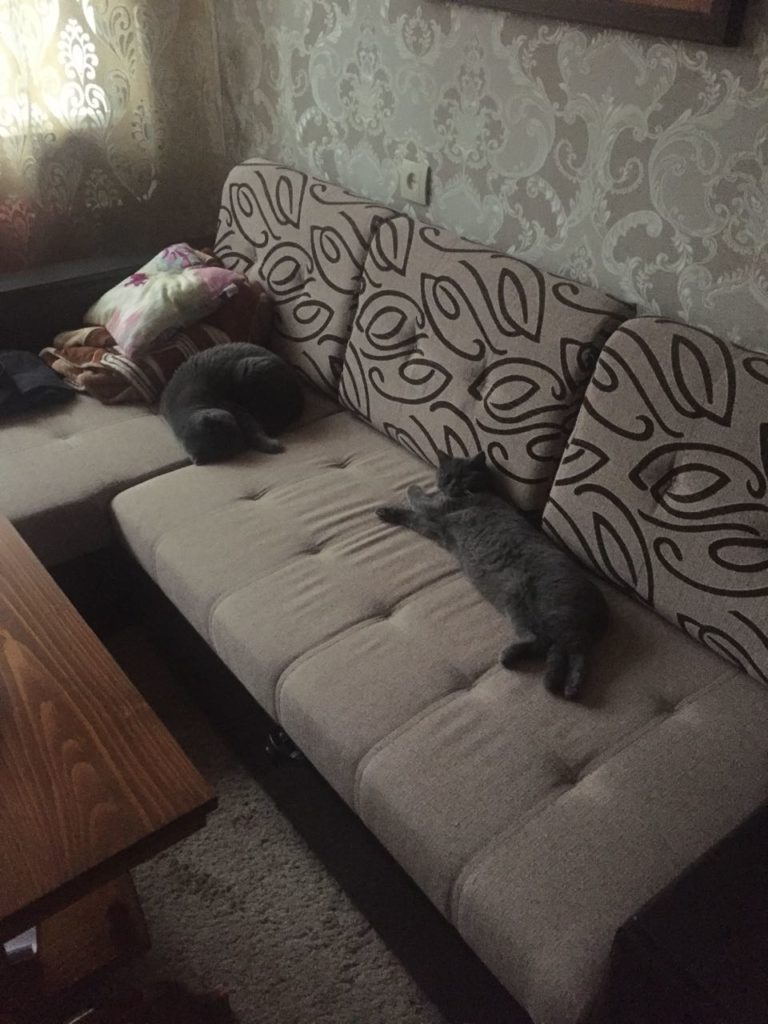