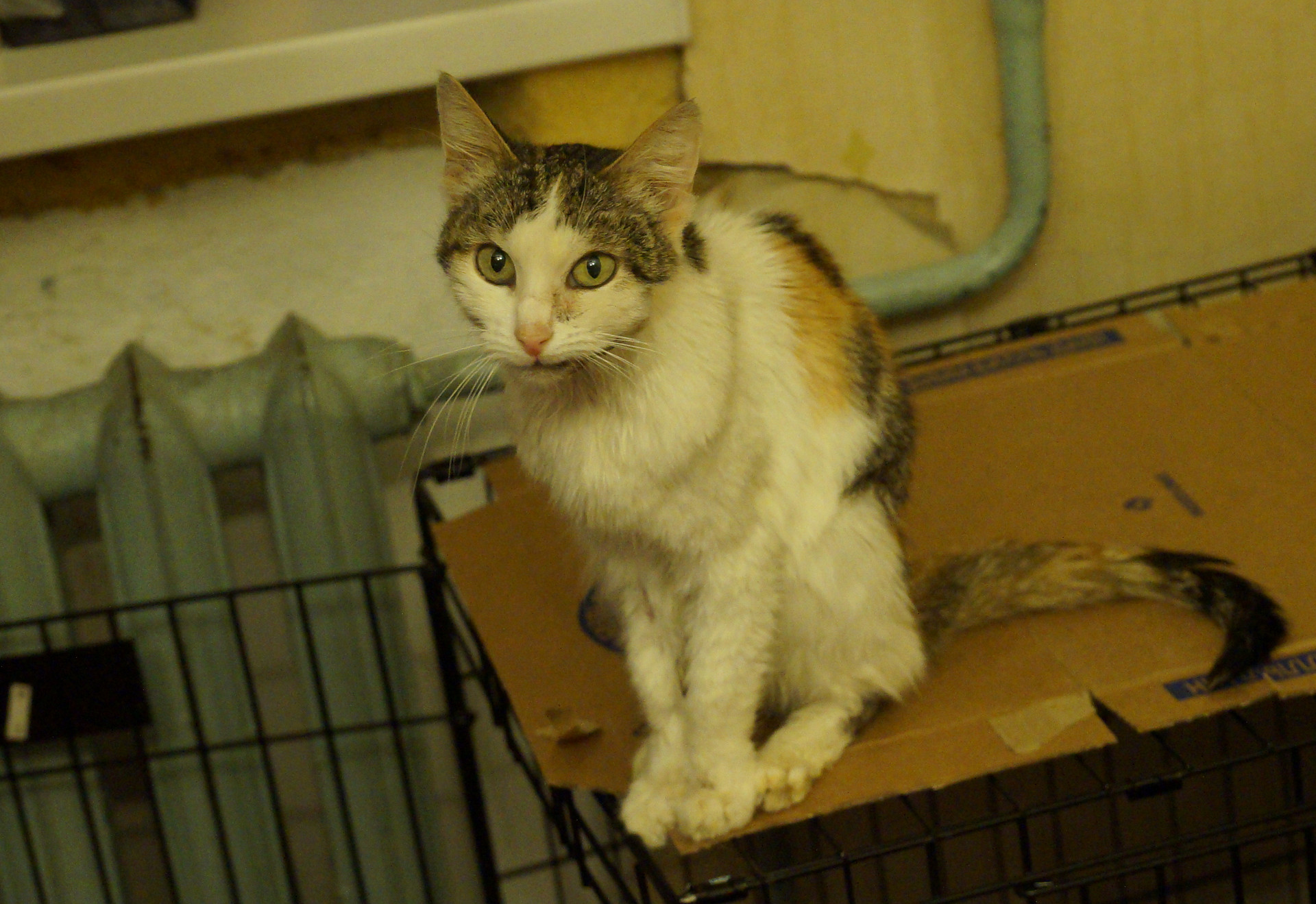 As usual, she suddenly appeared beneath our windows.
If I remember correctly, I was told later, that this cat had owners and they lived in one of the adjacent yards. These owners threw her out on the street a year ago when she fell ill first time (in 2014).
Later, for some reason, maybe for a winter time, they took this cat back to home. But by the spring her condition became worse and she appeared on the street again.

She sat right under our windows or on the porch of the building entrance. We thought that she is just injured, that somebody had kicked her or she has an abscess. We believed that she has some curable disease. 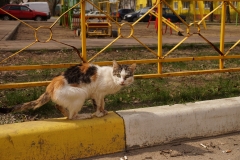 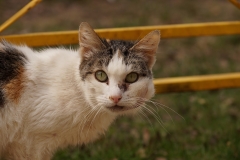 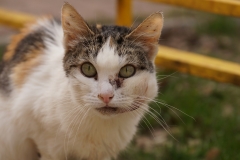 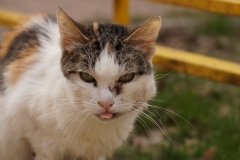 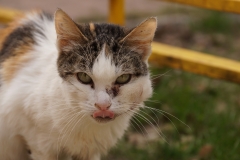 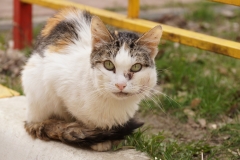 We had no free space for this cat in our home so we didn’t interfere for some time, but then children began to throw this cat into puddles and cat had no forces to resist. We took those children to task with help of their parents and decided to show this cat to the vet clinic.

We had no place in our flat for such an ill, run-down animal so in the beginning we made a treaty with one of the local woman that she would let this cat to stay at her cellar after treatment, because we anticipated that the cat would be unconscious after anesthesia.

Cat had been taken to municipal vet clinic where we was told that the cat, apparently, has an abscess, but…
But the tissue in her jaws has a strange structure and there is a probability that cat has a tumor.
That abscess looks like a secondary process which had been caused by something else but not trauma etc.

Under the anesthesia, cat’s cheek has been operated in presumption that she has an abscess. The surgeon made two holes in her cheek and put a drainage there.
We took the animal back and laid her in the cellar inside cat-carrying bag.

Unfortunately, the lady, which had the keys of the cellar, had changed her mind while we was at the operation and asked us to take the cat from the cellar as soon as possible and better before the morning.
Therefore we had no choice but to find a cage as soon as possible.

Luckily we quickly found one on the on-line auction at the nearby town and few hours later we was able to take away the cat from the cellar. 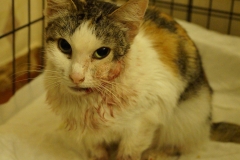 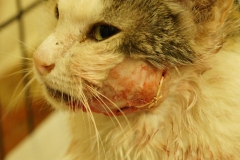 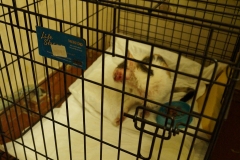 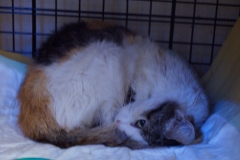 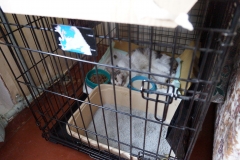 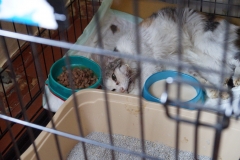 Cat was very dirty and exhausted but she waked up from anesthesia rather quickly and we hoped that she would get well.
Because she was in a poor condition and, apparently, it was painful for her to eat, we regularly did glucose injections under her skin.
We also used a huge amount of immunomodulators, painkillers and other drugs which were prescribed by the veterinarian.
Cat also had been visiting vet clinic 2-3 times a week to clean her wound. 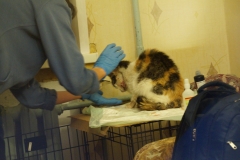 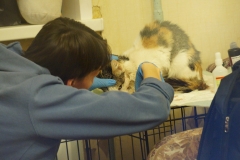 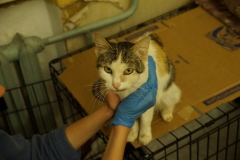 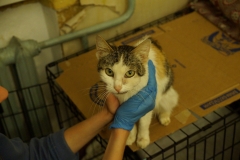 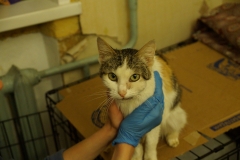 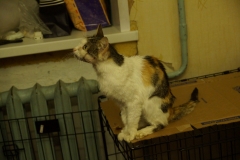 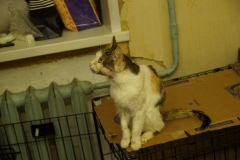 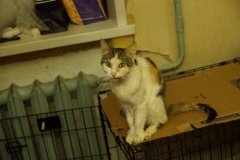 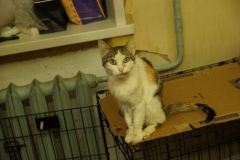 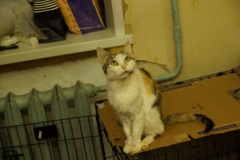 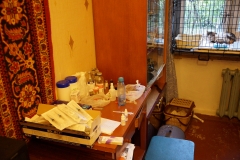 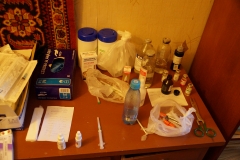 I must say that the doctors at the municipal clinic were (and are) very kind people. They worried for this cat too and even gave us few times expensive immunomodulators for free, but it seems that they were unable to recognize (or firmly point out?) that all these efforts are hopeless.

Cat lived with us for about two months and we did all that were possible for her. Sometimes it seemed that she feels better but the wounds on her cheek didn’t heal. She ate less and less. She lost weight more and more.
After the certain moment we began to see the signs of dehydration on her skin. Cat became weaker, she even couldn’t stay steadily.

We decided to show the cat to the private vet clinic, where the vet doctor wasn’t kind (she was rather rude), but she distinctly said us that the cat has a vast tumor that struck all her jaws and it is obvious. We’ve been told that we have no, and never had, any other options beside putting this animal to sleep.
In her opinion, when the cat was under the anesthesia at first time, suspicious tissue examples had to be taken and tested and, because it was obvious tumor, the cat shouldn’t have been woken.

We wasn’t ready for such decision because we had been hoping that the cat would defeat her illness for about two months.
This cat was a good one, tame, affectionate and… unlucky…

After visit to the private vet clinic cat lived in the cage for about one week.
She ate rarely and only meat. Probably she loved it much.
We moved her cage to the windowsill so she could look at the window and breath the fresh air.

Then we noticed the signs of destruction on her neck. The tumor began to destroy her chin and neck.
Our further procrastination of making a hard decision meant a torment for the cat.

We’ve put her to sleep.

When you put an animal to sleep it receives two injections.
The first is an anesthetic, which switches off consciousness.
The second is a drug which stops breathing.

We buried her in the forest and visit each summer.
She was our first such a close loss.

Moreover, maybe we catalyzed the process of tumor growth by doing the surgery and injections of glucose.
It is known that mechanical irritations, especially such invasive, accelerate and even produce tumors, but we had no choice because cat has an abscess too. 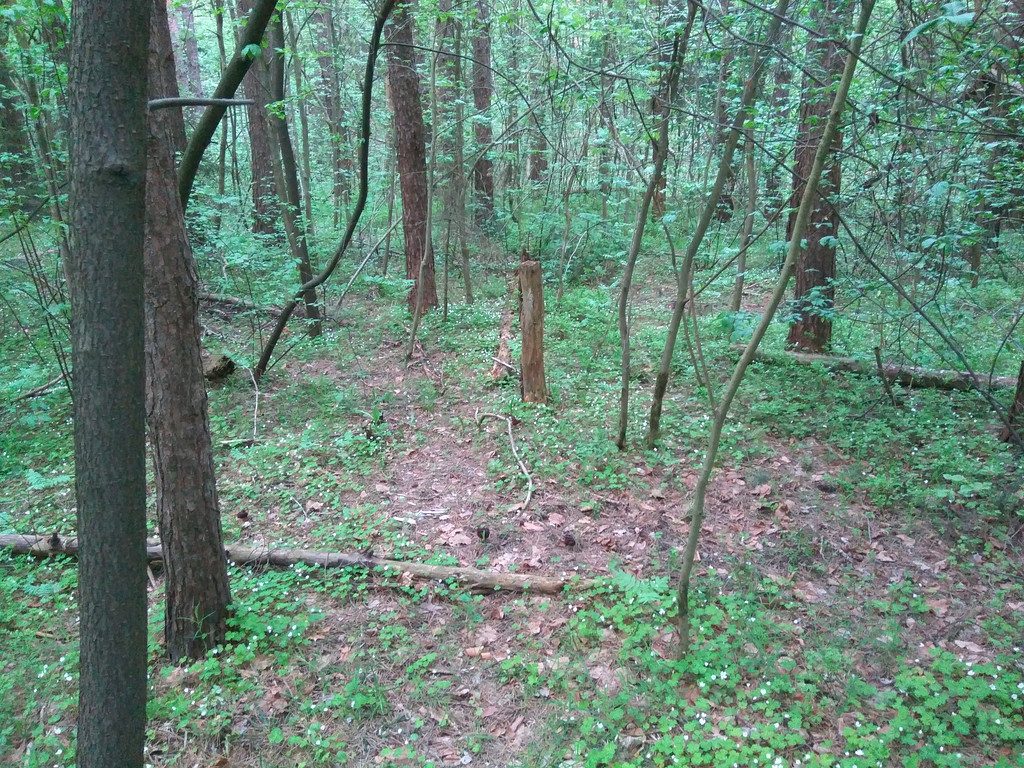