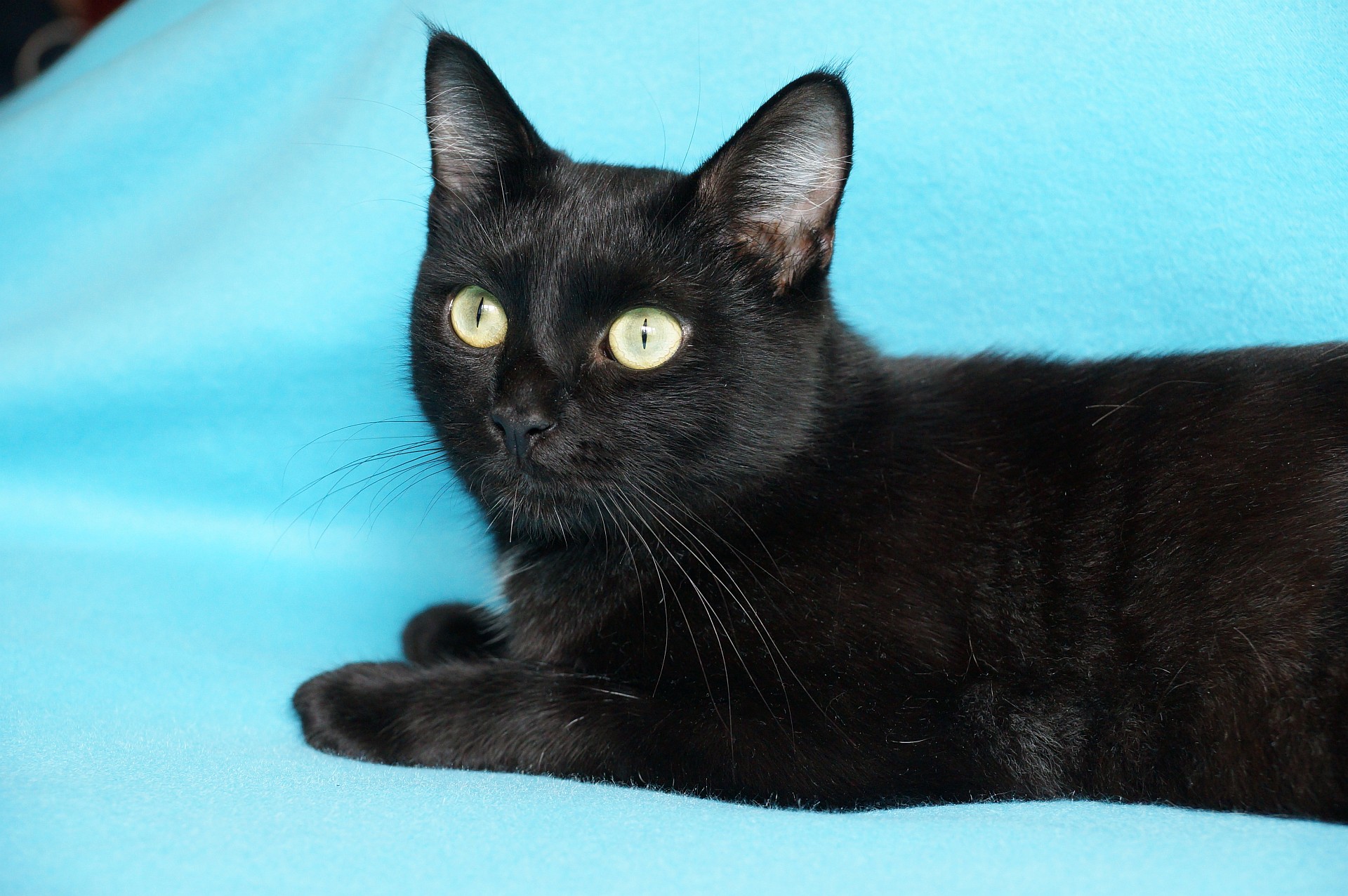 This is Galaxy. She is very human-oriented, social and talkative cat.

She came to us in the spring of 2016 (beginning of May). It was still cold when she suddenly appeared in our yard. It seemed that she had been abandoned because she appeared at the place where local old women feed pasta to homeless cats. It’s a typical situation when former owners leave their pets near the place where someone regularly feeds homeless cats.

The cat ran after all people beneath our windows for three days, looked at their faces and called to them.
It’s a typical behavior for abandoned/stray cats in their first time at the street.

Because nobody had taken her – we took her home and showed later to veterinary clinic.
It appeared that she is healthy but needs rest and good nutrition.
She was scrawny and her fur was brown (it is shiny black now). She also had a strange wound on her neck.

She came in heat almost right after we took her.
She was extremely agitated, screamed to open window, looked into our eyes and spoke something.
It is very interesting characteristic of Galaxy – it seems that she tries to talk to us.
Other cats, when they in heat, scream seems aimlessly, wallow on the floor and do other… less innocent things to attract some attention.
But Galaxy used to come when I lay on the couch (at this moment she was able to come very close to my head), looked directly into my eyes and said its “meow”.
If I turned myself, she clambered over me to see my face and to speak again.
We had been waiting for about twenty days until she gained some weight and restored her health and then we spayed her.

Few months after that her wound on the neck healed, her fur acquired deep black color and since that time she has been living with other cats in their room.
You can often see her on the live stream page.

She very likes to sit on our laps and to dig her nose in our clothes. She always tries to be closer to us 🙂
It is unusual behavior even for human-oriented cat…
And unless she is in our arms she never stops to talk, but we still do not understand the meaning…
Given this characteristic we understand that life in our cats’ room is not appropriate for Galaxy.
She needs a family that will love her, play and converse with her.

We are looking for a new home for Galaxy, but it should be the people and the place in which we would be sure, because she is a very rare, kind and socialized cat.

Update 21.01.2018
There is a wide spread superstition that black cat brings bad luck. So far Galaxy the only one who gets into difficult situations.
In Autumn 2017 she somehow managed to open the window and jump to the street when I was feeding other cats and didn’t see it. Fortunately, she was smart enough to stay under the window and then run into the house when our neighbors occasionally opened the door. It’s a very unusual behavior for a cat. She sat near the opened cellar window and yet she waited when somebody opens door into the house. She didn’t jump into cellar.
But this was the best that she could. She of course didn’t know where is our flat and how to get there and she didn’t recognize me.
Also luckily, that Aunt Valya was feeding cats at that time on the street, she noticed the new cat under our window and decided to call me and to tell me about it.
So I quickly grab wet Galaxy (there was a rain outside) and took her home.

Today we revealed that Galaxy was in severe danger during past four days.
She made her way in the wardrobe that is in the cat’s room. We haven’t noticed this. And we haven’t noticed that Galaxy is absent during four days!
It is horrible. She could die there.
We didn’t hear her though we feed cats at least three times per day.
Apparently we have too much cats now. We are already unable to keep track of each of them. Unable to pay sufficient attention.
It was so surprisingly – to see on the video archive how often we were at the wardrobe’s door but didn’t hear Galaxy.
All this time other cats have been keeping contact with Galaxy but we didn’t know that.


Fortunately Galaxy has endured this ordeal without any evident harm for her. 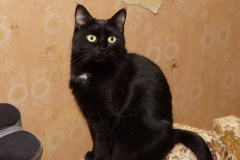 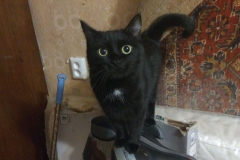 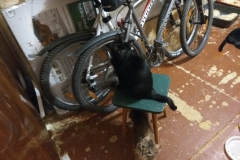 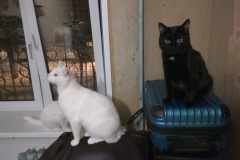 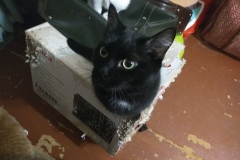 UPDATE Spring 2019
We had a happy event this spring – we finally found a new home for Galaxy. We had only few calls for her during this time and we tried to find a good family so this very tame and affectionate cat was forced to live in a small room with other cats and little interaction with humans.
Finally we’ve got a call from the family in Moscow. Their cat died recently in a very advanced age and she was looked like our Galaxy. We’ve made a short video to show our Galaxy “in action” where Timofey could also be observed… See how he looks at the camera? I bet he is thinking how to knock it out of hands and break into pieces…

Prospective owners were very determined and after about a week of negotiations we carried the cat to the new home.

I can’t say that it was sad to part with Galaxy, because I want a good life for our cats and this small room and rare opportunities to interact with humans is not what they deserved. Especially Galaxy. But three years is a considerable amount of life even for human being – let alone cat, so after a year or two cats become accustomed to live in their room. They think it’s their home, the safe place where they can always find a food and where very little surprises. Actually, even if we let any of our guest-cats to walk all over the flat freely – it eventually asks us to let it in the “cat’s room” where they prefer to sleep. (Vesnushka did so, for example)
Galaxy was unprepared for this journey and was bemused and maybe frightened. She cried all the way to the new home, which luckily wasn’t very long, and we couldn’t calm her down. And that made me feel sad.

But she recovered very quickly at the new place.
As soon as she got there, although still calling for someone or complaining, she had explored the new flat and had acquainted with the new owner.
As far as we can tell (we need more time to be sure), the new owners love Galaxy. Their previous cat was kind of “feral” and didn’t like a caress so our Galaxy is extremely new experience for them 🙂
Also the new owner said that the cat resembles a child from an orphanage. She doesn’t know good food, doesn’t know how to play with toys…
We are not quite agree with this statement, but anyway, we sure that Galaxy can be socialized in these aspects too, if her new owners were patient enough… 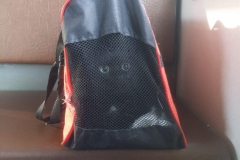 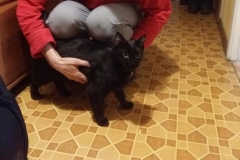 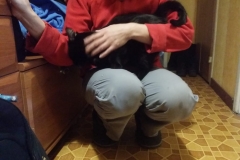 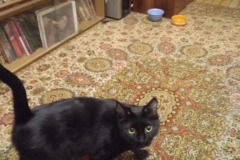 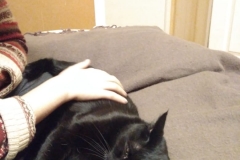 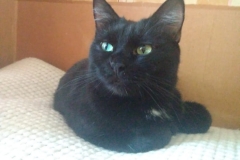 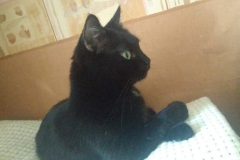 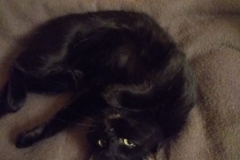 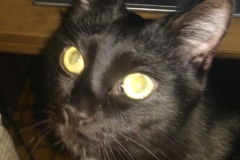 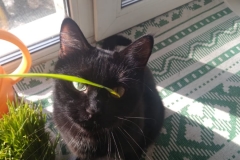 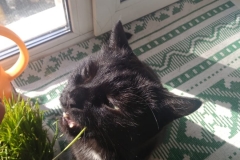 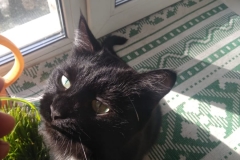